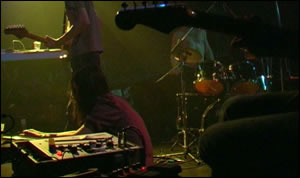 3. What is one of your prejudices?

4. In what way do you think music has the ability to change the way people live their lives?

Isn't music as essential a part of everyone's lives as eating is? From children's nursery rhymes to the ayahuasca songs of the yage initiate to OM the universal vibration to the B flat oscillation of jupiter to the stooges, it's part of being human - there's something so spiritual and necessary about music that I'm sure people's lives would be different without it.

5. Do you think that your name is appropriate for you? (If not, what name would be more appropriate?)

Appropriate and inappropriate at the same time; vibracathedral, a big resonant sound - yes; orchestra, not really as there's only a few people in the group.

6. What is the best piece of music you've ever created, in your opinion?

I can't remember the title, but the long track off Dabbling with Gravity and Who You Are holds a special place in my memory - also I've just edited some new CDs which are a step on from those that came before.

7. Right now, how are you trying to change yourself?

To do what's on my list of things to do.

8. If you had the time, what else would you do?

I'd learn to speak Spanish.

9. What social cause do you feel the most strongly about (negative or positive)?

10. What is your favorite joke (tasteful or tasteless)?

11. Who is your favorite author?

At the moment, Rene Daumal

12. What is your favorite movie?

Once Upon a Time in the West

15. What is one thing you would like to do/see/accomplish before you die?