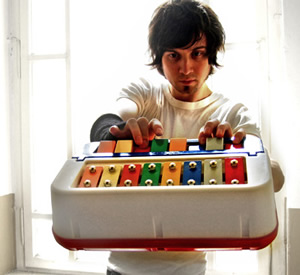 Matthias Grübel, a.k.a. Phon°noir, hails from Germany and crafts songs that sound at once intimate and cautious, whispered and clattering. His second album, Objects Don't Need Us

, was recently released through SubRosa/Forced Exposure.

“I spent my whole days under headphones....”

1. How do you feel about lyrics in music? Are they the focal point? Are they a distraction?

Lyrics play an important part, definitely. To me, bad lyrics can turn a great song into something really cheap. At the same time, a rather average pop song can suddenly begin to really mean something to you if you can relate to the lyrics, albeit only in the moment you hear it.... Once there are lyrics in a song, they become inseparable from the music and I can’t help but pay attention to them, therefore they have a strong effect on the song as a whole, at least for me.

Regarding my own work, lyrics certainly are important as well, but of course in a slightly different way. Usually they enter my writing process at a later stage, which means they react to the music and the atmosphere created. Yet, from then on they are an essential element, as they help to shape the final layout and appearance of a song. Often, the way the lyrics are written later influences the structure and character of a song as well. I like keeping lyrics as fragmented and minimal as possible. Usually it’s a process of stripping down 12 lines to 4, or something. It’s all about reduction, something that can be said of my music in general. In that way, I think the words can indeed function as some sort of focal point. At the same time, I always try to keep a good balance between the rest of the arrangement and my singing voice, which sometimes turns the voice into just one source of sound among many others. If you want to listen to what I sing, it will certainly open up another dimension to the song, yet my intention with lyrics usually is to give options, in terms of content and interpretation, as well as regarding the individual listening process.

2. Do you draw more inspiration from fiction, film, music, or everyday life?

50/50. Of course, a lot of my work is inspired by the things I consume as a music/art fan myself -- films, books, theatre especially. I like to soak up things and eventually they find their way into my work. For the current album, minimalist art, or let’s say the concept behind it, and musique concrete certainly were main (theoretical) guidelines. So... I’d say yes, these sources do help to shape the aesthetics of my sound and the way I treat my material while producing. Yet, of course, my everyday life has a huge impact on the things I produce. I believe music functions as some sort of mirror reflecting what you put into it, emotionally, intellectually, etc. I think I subconsciously store many little things in my head, just like everybody. And when I start working on music, these things become part of the result. The city, my friends, my past, my future, everything. At the same time, I am also very lucky to have many highly talented friends around me in my everyday life, who work in various other artistic fields, from graphic design to writing. Their views on my work from various angles is very important to me, and we all keep learning a lot from each other. I suppose, in that sense, art and everyday life fall into one, as these people inspire me a lot, both on an artistic as well as an interpersonal level.

3. What is your approach to translating recorded songs to the live setting?

I think my songs are complex and simple at the same time. Which is a result of two processes in writing and recording: endless experimentation and constant reduction. Many times, I am unable to actually play these songs live like they are on the record, because many sounds I use are deconstructed instrumental parts or field recordings, edited, chopped up, looped etc. -- it’s very detailed work. Therefore, when it comes to playing live I need to be able to get the song together with just my laptop, my guitar and my effects. Which means my main approach is to simplify the arrangements, making them playable as a one-man electronic live band. I also try to translate my rather intimate and fragile studio arrangements into something a little more powerful. I really like playing layers of louder guitars live. To me Phon°noir contains both these elements, but I think generally on stage I try to become more of an indie-pop guitar musician, rather than a laptop experimenter hiding behind a screen.

4. Was there a particular album that made you first consider becoming a musician?

Yes, definitely. Many different ones. In fact, too many to mention. The most important one that made me want to learn playing the guitar was a Beatles best-of called 20 Golden Hits. My cousin copied it for me when I was about 8 years old, and in looking back it is the sound of my childhood. Later what made me want to write songs and be in a band surely were Oasis’ What’s The Story (Morning Glory) (being 14) and Radiohead’s OK Computer

(a little later, when I realized how much I like more abstract structures in music). Those records surely kicked something off inside me. Along with Portishead’s Dummy, Madrugada’s Industrial Silence, The Notwist’s Neon Golden... Years later, around 2004, I think it was the spirit of the first CocoRosie record that inspired me the most when starting to record the first Phon°noir songs.

5. What do you consider your greatest accomplishment?

I graduated from university last year. After five years, that was quite a big thing. Yet for the moment I consider it a big accomplishment that right now I can make more than half a living on music -- I work for radio plays and produce scores for theatre productions. And, of course I am very proud to have released two albums on a great label, and it’s still somewhat surreal to see it reviewed, in The Wire for instance...

6. How did where you grew up influence your exposure to music and your tastes in music?

I grew up in a small town in the south of Germany. I lived there until I moved to Berlin at the age of 20 for my studies. My hometown is a nice place, but particularly toward the end of my time there I felt it was terribly narrow-minded and provincial. I usually walked the streets with headphones on, always. I spent my whole days under headphones. I discovered a lot of interesting music that way back then, also many of the artists I still consider influences on my own work. Music was a sort of escape, and for a few years it was definitely a means of attempting to be different from my surroundings. Therefore, I always tried to find certain things first... and I always wanted to know the latest stuff, especially from Britain. In our town there were one or two places to buy records from, one of which was, in fact, a drugstore. It wasn’t very romantic, but I still spent most of my money on CDs there, usually after having read about them in the various music magazines available in the municipal library. That was my main source of information, plus music television, of course. I’d have lists with interesting things I read about or saw, which I felt were worth checking out. So I’d spend hours in one of the stores, just listening. Every time I discovered another new band or label it was like adding another chapter to an ever-growing database in my head...

7. Are you more painstaking or improvisational about the recording process?

Both, in fact! I think I have a very exact and clear vision of what I want a track or a whole album to sound like when I start working, and I am ready to spend weeks on one song until I finally get as close as possible to that vision. Yet, my ways of getting there are rather unpredictable. I think only a handful of songs on my two albums have been written the “classic” way, with guitar in hand and humming a melody. And also only a handful of them have been recorded the classic way, with an arrangement and instrumentation, etc., in mind from the very start. The vast majority of them were developed through a process of trial and error. Coincidence is a huge factor there! The best things always happen after hours and hours of playing around with interesting sounds and loops... Therefore I’d say it’s definitely improvisational. When it comes to recording, I love experimenting, endlessly. In my experience, the best things are never planned.

8. What was the greatest decade in music?

In my own lifetime, definitely the '90s. In fact, I was a little too young to really grow into grunge and all that, I listened to Nirvana a lot, but I was 12 when it was over, so.... But just a little later, Brit pop and trip-hop would become THE sounds for me. Both were very important, both personally and for developing an individual taste in music. I was socialized, or socialized myself, with the records of (at first) Oasis, Suede, The Verve, (and later) Portishead, Björk, Massive Attack, Radiohead.... This is the music I still think started it all for me.

Yet, of course, looking back further in history, I’d say it's the 1960s. The Beatles alone would have been enough to make it the most important and most revolutionary decade for pop music. Yet one shouldn’t forget about the '70s either, especially in Germany. Kraftwerk, Can etc.... I think you couldn’t think of any contemporary electronic artist without the pioneering work of Kraftwerk. Ah, I don't really want to answer that question. 🙂

9. What are three things that you love?

10. What makes you unhappy?

From an equally endless list... being forced to spend time on things I don’t consider relevant, in whatever context.

11. What have you always wanted to do, but haven't yet? For a few years now, I’ve wanted to be able to travel to New York. I really hope I finally will next year.... (Yet, by now the dream has expanded a little, which doesn't make it easier. I think the perfect trip would now include playing a cozy little concert there as well.)

12. What are you listening to now?

It was Blonde Redhead's 23 when I started typing, now it's Best Of: Chet Baker Sings

. I bought the CD today.