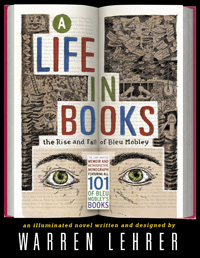 New books entering the world this week that will enrich your literary existence:

A Life in Books by Warren Lehrer: "Lehrer constructs the life of fictional author Bleu Mobley through 101 book covers of Mobley titles, including The Phenomenology of Lint and Peace Is Just Another Word for Nothing Left to Kill." (Time Out New York)

Johnny Cash: The Life by Robert Hilburn: "Hilburn’s biography, based on interviews with Cash and those close to him, unearths new details about Cash’s personal problems, from his guilt at not being a better father to decades of bad behavior and occasionally bad music." (Boston Globe)

And take a look at free excerpts from the 2013 National Book Award finalists.