The following books entered the world on November 10th, 2015:

A Wild Swan: And Other Tales by Michael Cunningham: A collection of reimagined fairy tales. Cunningham told The New Yorker, "I suppose a significant aspect of what inspired the stories in A Wild Swan...was that old question of mine, What happens after 'happily ever after'?” 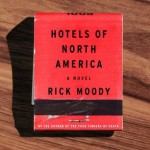 Hotels of North America by Rick Moody:  The New York Times calls it "Moody's best novel in many years."

Dear Mr. You by Mary-Louise Parker: A book of letters to the men in The Weeds actress' life. "I wanted it to be about gratitude, and I wanted it to be a book that wasn’t at all bitter. I think of it as a bunch of thank-you notes." -SFGate interview

Petty: The Biography by Warren Zanes: A "deep and intimate" look at the life of the Gainesville, Florida-grown musician. Listen to the NPR interview with Zanes.