1. The Buddha in the Attic, by Julie Otsuka. Who wouldn't want a Buddha in the attic, watching over them from up above, dusting off the old high school yearbook and keeping the mice at bay by radiating eternal bliss? To top it off, this Buddha was a National Book Award finalist.

2. Train Dreams: A Novella, by Denis Johnson. Seriously. I go to Malaprop's all the time and pick this book up and read the praise and think, "Wow, this must be a fucking great book." Then I realize the praise is for Tree of Smoke. Time is a circle that way, until you can break free of habitual thinking, and I think dreams move in the pattern of train tracks that enable you to find the way home. 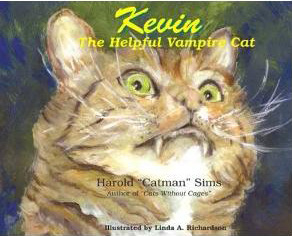 Crazy cat ladies as far away as the District of Columbia have been begging me to drive over to City Lights Books in Sylva, North Carolina (near the author's home in Cullowhee) to grab a copy.

4. Zazen, By Vanessa Veselka. I do in fact own this book--thank you, Red Lemonade--but it accidentally got tucked away in a box in a basement in Vermont. And I can't ask Buddha to ship it to me because he is stuck in the attic. I'm pretty Zen about the whole situation, though. It's like Suzuki Roshi says in the video below, "Even though you do not try to include, you know, everything, actually everything is in your mind."

5. In The Night I Go Sailing, by Anna-Lynne Williams. The postman literally just drove up in his tricked-out Jeep and dropped this one on my doorstep as I was writing this post. Backstory: I sent a card and some cash to our music editor, Anna-Lynne, in Seattle in return for her new, very-limited-release book of poetry. The card was like Quebec in that it was half-French and half-English. It said, "Our head is round so we can easily change our minds," or maybe it said something else. Here is what I got in return: 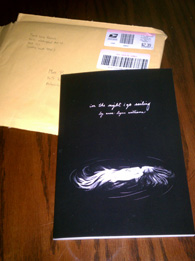 8. Jewball, by Neal Pollack. I think this wins the title of book mentioned most by its author in my Facebook news feed. "Who the hell doesn't want to read a book called Jewball?" is the essential selling point. Pollack calls himself "The Hot Jew of the Yoga Generation" on his website. What's not to like?

9. Rin Tin Tin: The Life and the Legend, by @susanorlean. I gather it's about dogs.

10. Through My Eyes: A Quarterback's Journey, by Tim Tebow. If I were to judge by his performances with the Broncos this season, I'd guess this book pains the reader to look at for the first 260 pages and then pulls off an amazing finish in the last two pages. But Tim Tebow taught me not to judge, so I'm going to pretend the whole book is awesome and give all the credit to God and his co-writers.