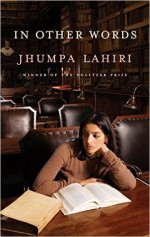 In Other Words by Jhumpa Lahiri, translated from Italian by Ann Goldstein: "The English translation by Ann Goldstein...participates in an exquisite duet across the page with Lahiri’s Italian. Strikingly honest, lyrical, untouched by sentimentality, In Other Words chronicles as philosophical and quotidian a courtship with a language as Ovid’s 'The Art of Love' does with amore itself." -Howard Norman in the Washington Post

Ways to Disappear by Idra Novey: "Ways to Disappear explores the meaning behind a writer's words — the way they can both hide and reveal deep truths. It begins with a famously unpredictable, cigar-smoking, 60-something Brazilian writer, Beatriz Yagoda, who goes missing — and the devoted young American translator who drops everything in snowy Pittsburgh, including her loyal but crushingly boring longtime boyfriend, to fly down to Rio to join in the search." -Heller McAlpin at NPR

The Fugitives by Christopher Sorrentino: "The Fugitives is neither an experimental high-wire act nor a plodding whodunit but something in between, an entirely new kind of novel with exceptional interior monologues animated by deception, double-dealing and a doomed affair that lends an air of existential dread to the story." -Jim Ruland in the Los Angeles Times

Georgia: A Novel of Georgia O'Keeffe by Dawn Tripp: "Georgia is a uniquely American chronicle — told by O’Keeffe — that starts with the importance of a good story and a killer bod. Does that sound uncannily like the techniques used to make careers for women a century later? Yes, and to degree that may shock purists, this is a book about Branding and Marketing, the first two commandments of success in the art world and our world." -Jesse Kornbluth at Head Butler

(Sorry these birthdays had to be belated. One complication of running an online lit mag from Las Vegas is, the Strip is like, right over there, and I get these free buffets, so I go eat crab legs with Noah Cicero instead of sitting at my computer when I'm "supposed to be blogging.")