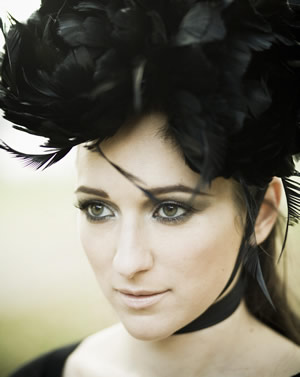 This June, Shara Worden releases her second album as My Brightest Diamond, A Thousand Shark's Teeth

, as you started to work on the two albums at the same time? Were you composing for both albums simultaneously, separating the ones you wanted to record with the string quartet and those you wanted to give a more rock treatment?

Yes, I was working on most of the songs at the same time. Because I wasn’t sure where I was going, or in the beginning was just learning to arrange, there were sometimes two versions of each song being worked on simultaneously, one more like chamber music and the other more band-oriented. I tried to avoid drums on the songs for Shark’s Teeth for a long time by working with a beat boxer, Adam Matta, because I thought that beat boxing lacked the dynamic issue that drums have, but in the end I rerecorded almost everything for Shark’s and used drums a lot.

Having been involved as one of the performers touring with Sufjan Stevens, and being entirely at the helm of My Brightest Diamond, do you feel there is something about the collaborative experience, as well as working solo, that is necessary for your expression?

Yeah, definitely. Someone else is always going to approach something differently than you would and that’s always interesting and stimulating. Even if there is tension in a collaboration, that frustration allows you to further define your own musical ideas, why you disagree or what it is that is important to you, and/or it gives you new ideas of how you might relate to other people in your own band. There is a certain unwritten set of rules that I have for My Brightest Diamond and what that sound should be, so it’s nice to do something in the rap world, or with Sufjan, or with Clogs...more chamber music, whatever the case may be, and be able to express something that might not fit in the MBD framework.

Can you talk a little about growing up with so many musicians in the family? Do you hear any elements of your parents' or grandmother's musical styles in My Brightest Diamond? Do you feel that you have rebelled in any way against the music you were brought up amidst?

I think because everyone in the family is fairly loose on style--they could get into most anything--style wasn’t really a topic of conversation or something to rebel against. I rebelled in many, many other ways than in music. Music wasn’t where the rules were in our house. But certainly I think that their eclecticism has had a big effect on me, and I still owe a lot to their idea that music was work and that it was something you did as a normal part of life and that everyone can do it.

The titles of both of your releases have referenced animals. Can you discuss the images or stories behind those two titles?

"Workhorse" is a song about an old plug that is no longer able to do his job and thus the society wants to ship him to the glue factory. I wrote the song when I was a frustrated waitress and I was meeting all these old actor/waitresses who weren’t getting theater work and at the same time my dad was getting the squeeze at his computer job because the company was reducing the size of his team but demanding that he do the job of two people. All of this added up to me thinking a lot about youth, work, unfulfilled dreams, and the faithfulness of the middle-class worker who plods along his whole life. In a way the idea of the Workhorse is about reestablishing value to something we have thrown away, whereas the idea of the Shark is about purging oneself of things we hold onto that we need to let go of in order to have a clear path of giving and receiving love. In the song “Goodbye Forever” off of A Thousand Shark's Teeth

, the lyrics talk about losing insecurities and fear so that we could feel the warmth of the sun, the light, like love, prickling all over us like a thousand shark’s teeth. The Shark has the power to destroy us, but its power is restrained out of love.

Neither of these albums were conceived as concept albums. Generally I think the subconscious, aesthetics, and the events of life are my theme builders, and only after the fact do I understand that there are threads running through the work. In the case of Shark’s, I did write a couple songs late in the game, in order to draw out this idea of the larger perspective, Alice of Wonderland growing seven miles high, the flexibility of our perception of ourselves being large or small, at the bottom of the world or at the top. There also seems to be a thread of the desire to escape the mundane, or the thought that our worlds run parallel with others.

Based on comments you've made in previous interviews, you seem to have great concern for the environment and animals. Are you pleased with the direction that music duplication has taken, with downloads and mp3s replacing jewel cases and other packaging? Is there anything about this recent shift in the physical form of music that you are unhappy with?

Holy cow! That’s a layered question. Yeah, I am very concerned about the earth. I think we are all so worried about our rent, our jobs, our survival, and that’s reflected in that our politicians aren’t talking much about the earth. This is a season of great change in many ways--economically, environmentally, technologically. Because I live four avenues from the coast, a rise in the water level will have a great effect on my neighborhood. And I’d be sorry as all hell if those arctic white furry guys became extinct, so yeah, it’s concerning to say the least.

As far as CD and LP production, it’s great environmentally speaking that we are going digital. I confess that I still like holding records and scouring over liner notes and artwork. Maybe that’s hypocritical. Music never used to be defined by holding something; the live performance or the music on paper was the defining work. A recording is still a thing unto itself to me, but maybe our relationship to it or our expectation of it will change a lot in the future. It’s hard to say. Unhappy? Um... nervous, hopeful, scared, thrilled. I am excited about new music. I am concerned with my survival as an artist. I try not to worry about it and just keep plotting something new to make and hope that the resources will be there for me to make it when the time comes.

Your vocal performances are clearly the powerhouse of your recordings. I'm curious how crafted these performances are or how often you improvise. Some singers, like Jeff Buckley, have claimed to sing a song as many as 100 times to perfect it, and then Thom Yorke has said that he likes to capture a first take that hasn't been labored over.

I did a lot of the vocal takes at the same time as the bassoon or harp sessions were recorded because it allowed me to vibe off of their energy, didn’t give me time to be too careful with the performances and also saved money! In some cases, though, like with “To Pluto’s Moon," “Inside a Boy,” or “From the Top of the World,” the songs were really hard for me to sing, so I had to do more takes of those. On my first Awry record (my old band), I did that sing-a-million-takes thing and I think I killed the songs, so I try to just keep it to less than three takes as much as possible.

What is your approach to translating your recorded songs for a live setting?

For the CD-release show in June we’ll have the whole shebang--band, strings, horns and marimba. That will be my first time trying the music out with everyone playing live, so I am really, really excited about it. It’s not a very movable outfit, though, so the tour will be with string quartet or with drums n bass. Each formation brings out a different aspect of the music and it keeps it alive and challenging.

What are your earliest memories of making music? What instruments were you first drawn to?

I was in musicals as a child and absolutely loved it. I think because as a young person I never thought of myself as a songwriter or composer, I didn’t take other instruments seriously and pursued the theater aspect so heavily. I wrote some bad songs on piano early on and didn’t play guitar until I was 19. I still don’t see myself as an instrumentalist, but I wish I could express myself better on guitar. Prince, Dave Longstreth, and Tom Verlaine make me drool.

What part of your musical education and experience do you consider the most important and shaping for you?

You said in an interview two years ago that whatever you worked on after A Thousand Shark's Teeth would most likely be dramatically different, as you tend to "work in opposites." Now that you have completed that album, do you have a clear idea of where you want to be taken next by your music?

I am thinking a lot about rhythm and about music as a corporate activity. Neither of those aspects of music have been particularly important to me before, but they are right now.

Carousels, a slight breeze, and crepes with strawberries.

My lack of acceptance of what IS.

Portishead, Tim Fite, Dirty Projectors, Clare and The Reasons, There Will Be Blood soundtrack…

More from My Brightest Diamond

Visit My Brightest Diamond on MySpace.