December 7th, 2015. Another day that we remember Pearl Harbor. Sat zazen for an hour this morning, then wondered about Japanese Zen Buddhist involvement in World War 2. Found an undated interview in the Kyoto Journal with Brian Daizen Victoria (author of Zen at War and Zen War Stories).

"Warfare and killing were described as manifestations of Buddhist compassion. The 'selflessness' of Zen meant absolute and unquestioning submission to the will and dictates of the emperor. And the purpose of religion was to preserve the state and punish any country or person who dared interfere with its right of self-aggrandizement."

"D.T. Suzuki is revered in the West as a true man of Zen. Yet he wrote that, 'religion should, first of all, seek to preserve the existence of the state,' followed by the assertion that the Chinese were 'unruly heathens' whom Japan should punish 'in the name of religion.'"

"We tend to believe that in certain doctrines — for example, the doctrine of Jihad in Islam — that if those people would just get rid of Jihad and the idea of Jihad, then Islam wouldn’t be so bad. But what I’ve tried to show is that unless we also explore the economic pressures, political pressures, the sociological pressures, the psychological pressures, i.e. all of those various aspects, then we are not going to understand what it is that’s going on that leads all religions, at one time or another, to sacralize violence." 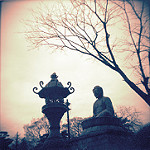 "What I’m hoping to do is help everybody recognise that this is a universal problem found in everyone’s faith. It’s not just in one religion; it’s in all religions. We have to recognise that we human beings have lived as tribal peoples for tens of thousands, if not hundreds of thousands of years, and that we are foolish to believe that we could just snap out of it as recently as 2,500 years ago and then suddenly enter this new era. Because still, whenever our own group feels threatened, we revert to ‘us against them.’"

The documentary film Zen and War examines how Japanese Buddhist monks participated in the war and discusses Victoria's book.

"Victoria made a very important point that during World War II a number of Zen Buddhists gave their support to the Japanese Imperial Army. But, while this is completely true and shameful, Victoria apparently felt the need to try and strengthen his case by deliberately distorting the words of a number of prominent Zen teachers."

In 2009, Warner interviewed a Japanese Zen priest on how Buddhism promoted the "wrong philosophy" during the war and where Victoria's book went wrong:

"A translator and historian must not take out of context, cherry pick, selectively edit to radically change meanings, serially mistranslate in ways radically altering the point of a statement. To do so is simply to have a political or ideological agenda, and to alter or invent evidence in order to prove one’s personal theory. While pointing to a few people who truly deserve our criticism for their behavior, Victoria has put words in peoples’ mouths who never said such things, he has (along with pointing to some people who truly deserve it) cast mud on other peoples’ reputations for things they did not say or do. Shame on him for doing so."