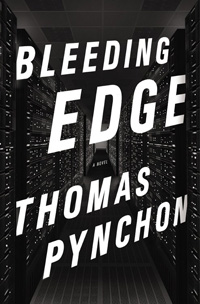 New books making it into the world this week:

Bleeding Edge by Thomas Pynchon - "Bleeding Edge is set in New York City, and the looming shadow of 9/11 touches every page. Nonetheless, many of those pages are outrageously funny, others are sexy, touchingly domestic, satirical or deeply mysterious." (Washington Post Book World)

Co-Mix: A Retrospective of Comics, Graphics, and Scraps by Art Speigelman - "A retrospective museum exhibition by the Pulitzer-Prize winning Maus creator is abundant justification for this greatest hits collection...a revelatory and detailed portrait of this visionary artist who invigorated the graphic novel and introduced it to the mainstream cultural world." (Miami Herald)

Men We Reaped by Jesmyn Ward - "In her wrenching new memoir, Men We Reaped, Ward takes us to her hometown of DeLisle, on Mississippi's Gulf Coast. It's a place ravaged by poverty, drugs and routine violence. But even so, the place — and the memory of those she has lost — keeps pulling Ward back." (NPR)

A few timely literary links that don't lead to the land of broken dreams:

Heather Lang reviewed Flies by poet Michael Dickman at HTMLGiant. I mention this because we're publishing an interview with Dickman tomorrow.