Despite the rising din of war drums I managed, lately, to read a few newspapers. The recent flap over alleged Iraqi atrocities when they occupied Kuwait (rehashed in the HBO movie of CNN’s purportedly valiant efforts in covering that war) reminded me of the anecdote surrounding William Randolph Hearst’s dispatch of artist Fredrick Remington to Cuba. He was to illustrate the fighting in Cuba’s struggle for independence from Spain. Remington, having a few things to learn about the war correspondent’s craft, wired Hearst from the vantage point of the patio of the Hotel Inglaterra, “EVERYTHING IS QUIET. THERE IS NO TROUBLE HERE. THERE WILL BE NO WAR. I WISH TO RETURN.” To which Hearst famously replied, “PLEASE REMAIN. YOU FURNISH THE PICTURES AND I’LL FURNISH THE WAR.” -W.R. HEARST. Of course, we know things have changed these past hundred years since the United States fought so unselfishly for Cuba’s independence—from Spain. Apparently, for this next and all foreseeable future wars, the Defense Department will be in charge of both the wars and the pictures. A bad week for mid Centurians, it was. First, the death of Joe Strummer, who composed one of my favorite pieces of music, the soundtrack to Alex Cox’ under-appreciated film Walker, and then the passing of glamour photographer Herb Ritts. These deaths no doubt raise the chill factor among the overabundant male baby boomer generation who in so many ways display an undaunted disregard for mortality or even the decrepitude of aging. As Mark Feeney by-lined the obit/appreciation of Herb Ritts in the Boston Globe, I approached my reading of it with no trepidation. My confidence in Feeney’s intelligence and judgement was again reaffirmed:

American culture has always had a healthy regard for cash, calculation, and celebrity (especially celebrity - what other flag boasts so many stars?). Yet something changed in our relationship to those things in the 1980s. What had once been considered commodities were now seen as virtues. The Reagans were in the White House. ''Dallas'' dueled ''Dynasty.'' Madonna ruled the charts. ''The Bonfire of the Vanities'' topped the bestseller list. It was Herb Ritts who took the decade's family portrait.

Not so, in Ginia Bellafante’s obituary in the New York Times. Here’s her first graf:

Herb Ritts, the photographer whose glorifying images of the well known helped to further mythologize celebrity in the 1980's and 90's, died yesterday in a Los Angeles hospital. He was 50 and lived in Los Angeles.

Now, granted, Feeney had about 150 more words to form something with, but I wondered why one would read further into Bellafante’s piece...except, perhaps, for some sign of thought and reportorial craft. Which, alas, did not obtain. Feeney had much else in the way of incisive observation about Ritts’ place in the celebrity industry, much of it the result of some keen thinking and an easy grasp of the cultural milieu of ‘80s and ‘90s. Not so the NYT writer who called, what I guess are the right people: Vogue’s Anna Wintour, Ritt’s gallerist, Ethleen Staley, Richard Gere, and Vanity Fair’s Graydon Carter— who was able to get the word "iconic" in the piece. I met Herb Ritts a few times. A nice man. I was always impressed that Herb had taken pictures of Stephen Hawking and Charles Bukowski and some other folks who were not, you know, beautiful. But my story will have to wait for the publication of my highly anticipated memoir-in-progress, currently entitled Primum Non Nocere. There is an inverse relationship between my avowed disinterest in reading book reviews and reviews of any kind and my wanting to avoid disparaging my comrades who, for some reason, are ploughing and back bending in the potato patches of criticism. As Steve Almond recently told me, “The life boat is small enough as it is…” On the other hand, just having read Dutch Leonard’s (yeah, I feel like I can be familiar because, I have met the man and he even told me why he is nicknamed ‘Dutch’. But, why digress?) story collection I couldn’t pass up perusing the New York Times review on When the Women Come Out to Dance. Truthfully, my dance didn’t begin well: “If you were to tell me you had just read an Elmore Leonard novel where someone says something out of character, I'd say you were a liar.” What kind of fahcockta way is that to start a conversation? Then this, “Reading the clipped, unfailingly accurate dialogue that comes out of the mouths of Leonard's characters can make you feel as if you're in the presence of a writer who is both ventriloquist and psychic.” I’ve read over twenty of Leonard’s novels, some a few times, over the past ten years and it would never have occurred to me to cast Dutch in this light. Was it my failure of imagination? But here’s the capper on that, “It's not just that Leonard captures the cadences and elisions of each character's speech, it's that he has an uncanny sense of knowing what each will say next.” Oh my! This piece wends its way toward conclusion with this lofty and sage proclamation, “There are plenty of literary luminaries who could learn a lot from the discipline and craft of writers pigeonholed — or dismissed — as genre writers.” And then —I must confess I was frothing as I read and reread — “My Christmas wish this year was that when Cormac McCarthy, Michael Ondaatje and Toni Morrison, to name but three, looked under their trees, they found that some kind soul had been thoughtful enough to send them a copy of Elmore Leonard's latest." That this is self-evident idiocy, I am convinced. Meretricious glibness masquerading as literary criticism? Maybe. A good reason never to read Charles Taylor’s goofy blabbering again? Absolutely. 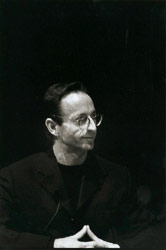