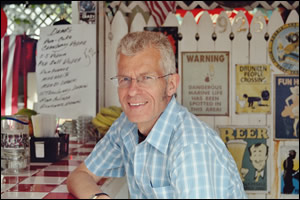 Stephen Clarke is a British novelist and journalist living in Paris, France. In 2004, his first novel, A Year in the Merde

, became an underground sensation in France and eventually turned into an international bestseller.

1.  Is there a connection between writing and music? If so what is it?

Music is my favorite genre, because it is pointless--it's pure pleasure. That’s why I write comedy novels, so they're pure pleasure. Hmm, I suppose I mean my novels are pointless. My publisher wouldn't be happy.

I love the three-minute song. It can tell a story as well as a 300-page novel, plus you have the music element that you don't get in books. Personally, I try to write in short sketches, a bit like a series of self-contained three-minute songs. Oh my god, that means I write concept albums. My publisher will be even less happy to hear me admit that.

2.  How do you feel music affects your writing in particular?

I’m a believer in popular culture. For me, a Beatles song is as important to culture as a Beethoven symphony or a TS Eliot poem. Charles Dickens was popular culture--he published his novels chapter by chapter in magazines. So I’d say people who have given this importance and respect to popular culture, like the Beatles, Dylan, and Hendrix, affect me. I studied at Oxford University, but people like that kept reminding me that there is no real difference between a great pop song and a great novel.

3.  Are there any musicians that you feel have had a profound affect on your writing?

Yes, lots of French "singers" who I hate so much that they inspired me to write a whole chapter in a book about France explaining why they are crap. The book's called Talk to the Snail, out this autumn.

No, I can't. If I listen to music, I can't concentrate on the words I’m writing. I play guitar and bass, so if I’m sitting at the computer trying to write, I’ll be playing the bass line in my head or working out the chords.

5. What sort of music do you listen to outside of writing time?

Mostly guitar rock. Anything from the classics (Beatles, Hendrix, Free, Blur) to a lot newer poppy stuff like Arctic Monkeys, The Killers, and Kasabian, too, until I read an interview with them and found out they were dickheads.

I also love listening to Bach’s cello suites. One person, one instrument and all these amazing riffs that are so complicated and interlinked that I can't get my brain around them at all. No way can I work out the chords of Bach’s cello suites. I can sit there and drift off into my imagination, thinking up scenes and situations for my novels.

Dust…and KT Tunstall. I love listening to women singers now and again to try and bring out my feminine side and reduce excess testosterone levels. No, she's a brilliant songwriter, very bluesy, and has an amazing emotive. I lived in Scotland, too, so she reminds me of some women I used to know--very ballsy if that's not a contradiction in a woman.

7. What are some recent concerts you've been to?

I go to quite a few. My recent favorites are Arctic Monkeys, Cream’s reunion concert and KT Tunstall.

Jerry Sticker is a writer who lives in L.A. and works in music publishing.