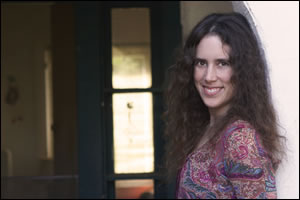 , which won Barbara Kingsolver’s Bellwether Prize. Her latest novel, Self Storage, will be published January 2007.

1. Is there a connection between writing and music? If so what is it?

I recently played Annie Oakley in a local production of Annie Get Your Gun. This was a very unexpected adventure—I took my daughter to the audition, the director convinced me to audition, too, and somehow I ended up with the lead role. I had never sung or acted before in my life, so this was quite a transformative experience. In learning to sing, I found that there were so many parallels with the writing process—so much of it (acting, too) is about letting go in order to let the notes, the words, through. So much of it is about being fully present in that moment of expression. I think there are connections between all forms of art—they all attempt to capture and express something that is otherwise wordless, formless. Writing and music seem especially wedded in that way (although music has the luxury of not always having to use words).

2. How do you feel music affects your writing in particular?

I'm not sure about in particular, but in general, music tends to trigger emotion on a very deep level for me, and that is what I want to access when I write. I suppose music does help keep me connected to that well of feeling. When I write, I want to give voice to the sorts of memories and sensations that music evokes.

3. Are there any musicians that you feel have had a profound effect on your writing?

Talking Heads changed my life in high school. I heard them for the first time during a yearbook meeting (a music-related sidebar: Liz Phair was the photography editor on staff), and I was blown away. I loved their combination of playfulness and intelligence and strangeness, and I think their example left its stamp on my own work.

Prince helped me access my raunchy self in high school, and that influenced my writing, as well. I've also been inspired by musicians who have wed their art with social conscience, like Ani DiFranco and Tracy Chapman.

I have a hard time listening to music while I write, especially if the music has lyrics—the words from the song fill my brain and make it hard for me to squeeze any other words in or out. My husband is in two bands, and they sometimes rehearse at our house. For a while, I couldn't write while they played—there was just too much sound reverberating through the walls (and my husband plays pedal steel guitar, which creates a frequency that seems to cancel out thought for me, kind of like a dog whistle)—but I've become so familiar with their music, I can tune it out now if I have to get some work done.

5. What sort of music do you listen to outside of writing time?

Well, I do listen to my husband's bands a lot (which I very much enjoy, despite the dog whistle/tuning out comments above). Bucksworth is a roots rock/alt country band with fabulous song writing and some really soulful grooves, and Old Brown Shoe is a two-guitars-and-stand-up-bass trio featuring brothers' duets from the 30's and 40's. Aside from that, I seem to live on a steady diet of Cake, Beck, Suzanne Vega, Talking Heads, Lila Downs, and Prince, with a liberal helping of 70's disco and show tunes.

Senses Working Overtime is in my car's CD player—it's an 80's compilation CD from Starbucks, of all places (evil corporation, I know—I try to frequent indies most of the time). I heard it playing and had to buy it; it's a great mix of bands I loved in high school—Talking Heads (surprise!), New Order, The Cure, Echo and the Bunnymen, etc. The tracks bring back all sorts of memories as I drive around.

7. What are some recent concerts you've been to?

Mostly, I've been to a lot of Bucksworth gigs. They often play with other LA-area bands, such as Hobo Jazz, Artichoke, Rancho Deluxe, and the Scandelles—which happens to be our friends' teenage daughters' band—so I've been exposed to some great local music. Bucksworth was invited to be part of a national stunt/music tour that starts this fall, and they'll be playing with people like Kanye West and Lyle Lovett, which will be a trip. The last big name concert I attended was David Byrne—he played the Hollywood Bowl last year with Si Se, Arcade Fire and The Extra Action Marching Band. An amazing show. When he sang my favorite song in the world, "This Must Be the Place (Naïve Melody)," I sobbed and sobbed.

Jerry Sticker is a writer who lives in L.A. and works in music publishing.