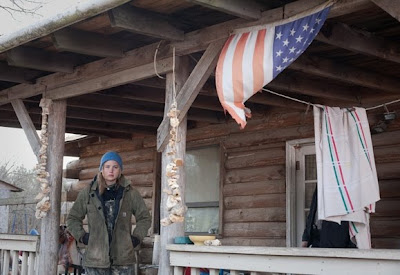 Deep in the Ozark Mountains, there’s a culture that’s often misrepresented in film, if represented at all. Countless films feature Backwoods Hillbilly characters that are known more for their empty brains and chainsaw massacres than for anything that accurately represents the culture that they’re supposed to hail from. With Winter’s Bone, Debra Granik (Down to the Bone, 2004) set out to capture the people portrayed in Daniel Woodrell’s novel of the same name. Of Woodrell’s novel, Granik has been quoted as saying that “we had something really beautiful to start with.”

The film crew set up in Southern Missouri and immediately went to work getting to know the locals. They studied Ozark linguistics, music, dress, hunting techniques, food preparation, and other elements of their cultural composition. The result of their preparation is a vigorous film with many strengths and very few weaknesses. The portrayals of its subjects are well developed, balanced, and far from Backwoods Hillbilly. It’s clear that filmmakers paid attention to even the area’s smallest details and carefully molded each one into the film. If they started out with something beautiful, rest assured that they ended up with something even more beautiful.

Casting was held both locally and around the country until the production team decided a unique blend of professional and non-professional actors to make up the cast. Professional actress, Jennifer Lawrence, who will appear next in Jodie Foster’s The Beaver, landed the lead role of Ree Dolly, a seventeen-year-old who’s forced to take care of her mentally-ill mother and two younger siblings when her meth-baking father, Jessup, goes missing before his court date. Ree later finds out that her father has put up their house as bond collateral and that she’s got to find him before their home is taken away. Standing in Ree’s way is the community that surrounds her. In a population where everyone seems to know each one another, either through business or blood relation, lips remain sealed and tensions stay high when Ree starts asking all the questions that no one wants asked.

Ree’s determination serves as the film’s driving force and draws its strength from the intensity of the conflict. Lawrence’s performance as the unapologetic teen is undeniably forceful. Through her own determination, she encapsulates the multi-faceted character and seamlessly transforms back and forth between Caring Sister/Daughter and Relentless Woman on a Mission. The film features a number of noteworthy performances but another that really stands out is Dale Dickey’s (Domino) exceptional depiction of Merab, the female ringleader who warns Ree of the danger that comes from uprooting other people’s business. The scenes which Lawrence and Dickey share together are electrifying. All at once, these scenes highlight the strengths of Woodrell’s writing, Granik’s directing, and the capabilities of both actresses.

Winter’s Bone should not be missed. Just ask Parker Posey, who presented the Granik with the Sundance Grand Jury Prize for U.S. Dramatic Films. At the ceremony, Posey said, “If [Winter’s Bone] doesn’t get the respect it deserves, I’m going to stab myself.” So, if for no other reason than Parker Posey’s well-being, watch Winter’s Bone.