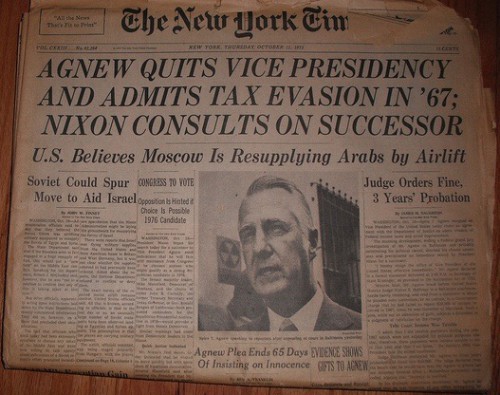 Investigative print journalism is dying. It's not what it was the last time a Republican moved into the White House without releasing his tax returns.

Meanwhile, TV news has been a corporate-run charade for decades. Thanks to neoliberal deregulation of media, six companies control over 90% of the information we consume.

But that's old news. Now, Donald Trump's hiring of Steve Bannon as Chief Strategist indicates that the White House Brought To You By Cheetos will run a white-supremacist propaganda machine through Brietbart (or however you spell that dead Nazi's name--I don't care to Google it).

The new information war is already being fought on Twitter. In his first week as president-elect, Trump focused his diplomatic energy on sending angry tweets to the "failed N.Y. Times." He's fired off two dozen tweets since election night. Bizarrely, almost a third were directed at the Times--just for reporting facts about his incompetent transition.

(Three other tweets were revenge-fueled taunts at Republicans who didn't endorse him--the Bushes, Romney, Kasich--and none thanked the people who worked hard to put him in office.)

Trump's attack on the Times may seem like another goofy quirk of his sociopathic personality, but the strategy is clear in the scheme of information control. With print approaching zombie status, TV news neutered, and a new Goebbels controlling government information, the Times' reporting is almost all that remains of mainstream American journalism to keep the new regime's pathological lying in check.

In 2014, the Times was one of only three daily newspapers with circulation over a million: the others being the Wall Street Journal (owned by Trump-friendly Rupert Murdoch of Fox News) and USA Today (which is basically corporate TV news on paper).

No other newspaper comes close to reaching that many homes. The Jeff-Bezos-of-Amazon-owned Washington Post goes hard on Trump but only has about 25% of the Times' pull. Still, the Post's reach was enough of a threat to cause Trump to revoke the paper's press credentials and call them "dishonest" and "phony."

Once the Times falls in line or gets sufficiently discredited, where else do well-meaning Americans turn for information to hold their government accountable? Howard Stern? Conspiracy theorist Alex Jones (who was one person Trump actually took the time to thank after the election)?

You might think Anderson Cooper will save you. Listen closely: Anderson Cooper isn't going to save you. The corporate media conglomerates will play nice with Trump, normalize him, and lionize him. They'll embarrass themselves and humanity at large with lukewarm "criticisms" of the new regime in between Viagra commercials. For the next four (or God forbid eight) years, they'll continue to generate Jimmy-Fallon-hair-rubbing PR fluff that pacifies the masses. Not because they're afraid of Trump's tweetstorms, but because they are owned by the same business interests whose unlimited influence on politics created America's soon-to-be-fascist state in the first place.

Trump got elected on fake news made viral by uncritical Facebookers and aggressive Russian intervention in the election. With the help of Putin and other far-right forces coming to power, he is leading us into a post-fact world, designed by "the 1%" to convince the working population to act against its own interests.

To quote Bernie Sanders (and simultaneously explain why the corporate media shut Bernie out of contention for the presidency): "There is no justice, and I want you to hear this clearly, when the top 1/10th of 1 percent--not 1 percent--the top 1/10th of 1 percent today in America owns almost as much wealth as the bottom 90 percent. And in your hearts, you will have to determine the morality of that, and the justice of that."

I'd never tell you how to spend your money, but it might be a good time to subscribe to the New York Times. Or any news outlet that holds those in power accountable.