The other day not only did I speak
with Robert Stone but I attended his reading/book signing at
Brookline Booksmith. One of the many revelations coming from my
chat with the portentous Stone was that a fairly significant amount
of his tour of duty in Boston (and other places) was involved in
going to book stores and booksellers (I suspect that there is a
difference, one I have yet to get clear on) and signing copies of
his most recent novel. I had previously had some dim awareness that
authors had very commercial duties, but this most recent reminder
connected with some of the bulletins that I receive periodically
from some, uh, booksellers offering a diminishing supply of signed
editions of recent literary novels. Which led me to thinking, “Why
would someone want a signed edition that had some marginal personal
(actually non-existent) connection with the author?”

The whole book tour rigmarole may have been (I know Ann Beattie
takes this on in "Essentials Get Lost in the Shuffle of Publicity,"
Writers on Writing, Vol. II) discussed and thrashed out
elsewhere, but I am particularly fascinated with the book-signing
ritual and its comedic aesthetic implications.

Buying a signed edition where the buyer has not attended the reading
seems to me to be something of an empty gesture. What is the value
of this autograph, especially if authors, publishers and bookstores
conspire to exponentially increase the number of signed copies in
the marketplace? Anyway, booksellers are (after all business people)
participating in this, of course, as a commercial tactic. Nothing
wrong with this except the suggestion a valuable service is being
provided. Talking with Graham Swift on this very subject, I also
learned that he is delighted with the result of this tedious activity
because, after all, a signed book is a sold book (meaning retailers
cannot return unsold copies to the publisher).

Apropos of nothing, Swift also related a story of man in Toronto
who had a copy of Swift’s novel, Ever After, and
that its owner had it signed by over 200 authors from all over the
world. Swift’s point was really to express what a wonderful
book city the Canadian metropolis is. Not to mention that it also
suggests the great value Ever After's owner attached to
this particular literary work.

At Stone's reading there were a fair number of odd birds who had
their obligatory strapped canvas bags that, I surmised, carried
various bits and pieces of the Stone oeuvre, waiting to be signed
and in the minds of their owners exponentially raised in market
value. (By the way, I have never ever seen women doing this.) Collectors,
these were. Now I am somewhat familiar with this pathology as one
of my close friends is so afflicted. His case study would, I think,
offer great insights into the treatment of this malady. As a public
service I offer an example of the depravity to which he has been
driven. Getty —let's give him a pseudonym— has all manner
of pop cultural items autographed by people who have some (sometimes
an esoteric) connection to the "ding an sich." When the
occasion presents itself, he festoons books, CDs, and posters with
yellow stickums instructing the signee where and what to sign.

As a counter point and to trumpet my own nonchalance on this matter,
I have had hundreds and hundreds of books signed by authors whom
I have just spent the better part of an hour speaking with. To commemorate
these moments, I ask my co-conversant to sign their book(s). Wherever
and whatever—though I do hint inscriptions testifying to my
skill and genius will be cherished by my heir and me. My friend
Getty has chided me for allowing these heirlooms to be signed to
me (they may be less valuable) and for not insisting on a signature
on the title page and other such things.

Now I am aware that modern first editions were a hot commodity
a few years ago, especially in that mythic land of Southern California
(and may become so again). George Pelacanos told me that copies
of his early books are worth $800. Consider that George was only
paid $2500 to write them, and you might sense an inkling of the
disparities in the book world. And another thing, I am pained that
the most valuable books are the ones that haven't been read, the
ones in pristine and unopened mint condition—here you have
the sordid triumph of materialism. And frankly I resent the collector
types who come to these reading as if they were baseball trading
card conventions. I wish I had the stomach to recount some of the
mindless conversations I have overheard from these schzlubs. Suffice
it to say I understand why some authors (John Irving and David Mamet)
have taken the self-protective stance of only signing their current
books.

When Little Brown was preparing its campaign for David Foster Wallace's
Infinite Jest, they sent out a thousand signed advanced
reader's editions. I asked Foster Wallace about this, and he related
that he just signed a thousand sheets of paper which where later
bound in to the above mentioned books. Currently at Bookfinder.com
there are about ten copies of the ARC of Infinite Jest
being offered ranging in price from $85 to $250 (one of the dealers
claims there were only 200 copies). Again I wonder what value is
being propagated here.

Further ruminations on this subject will be offered in my memoir-in-progress
Don't Burn the Chicken Fat. In the meantime I am going
to return to my extreme enjoyment of Michael Lewis' Money Ball
and two young lads' story collections (Jonathan Furst and Benjamen
Cavell) that come highly recommended by their esteemed editors Robin
Desser and Gary Fisketjohn. You can be sure I will have my copies
of the advance editions signed… 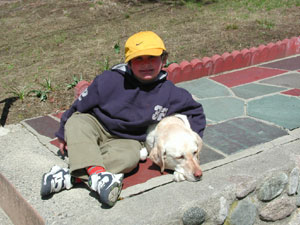 My Heirs: Cuba and Rosie
by Robert Birnbaum