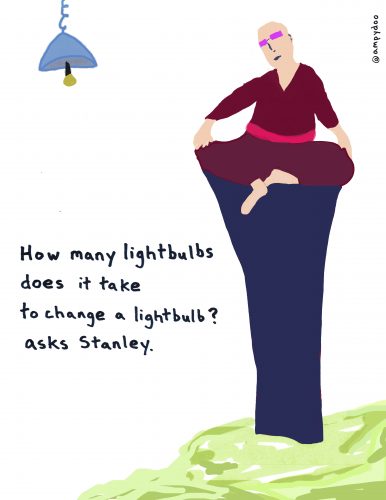 How much time do you have? You're busy, I get it, and stressed, and maybe you're even hungry: maybe you've only got one slice of bread, and you're trying not to go to the store, because it's not safe out there, but you're hungry, and hunger only grows. One slice of bread? Sorry, that's all this tale allows.

So you have one slice of bread. You look in the fridge, and there's some weeks-old Romaine, an unusually tan container of sour-smelling gunk, someone else's off-brand of spaghetti sauce, too heavy on the olives—who left that there?—two lite beers marked LITE BEER, and a box of extra-extra firm tofu. The shelves on the refrigerator door have plenty of condiments, of course, including three varieties of ketchup, and two jelly jars that aren't labelled, which you suspect arrived courtesy of Neighbor Dave. You don't bother checking in the pantry; after the pantry door stuck in October, you haven't actually used the pantry, although you should probably find that bag of onions, that could be the smell.

If I were a poet, and that was my fridge, I would pile a plate with metaphors: I'd serve up a heap of yearning, a mess of nostalgia, a loss casserole, and the possibility of after-dinner redemption. That is, until I finally discover two real eggs hiding behind the sauerkraut. Poets are all about the real, one egg for you, one for me. We'd be hungry again in an hour, sure, but poetry thrives on hunger, doesn't it? 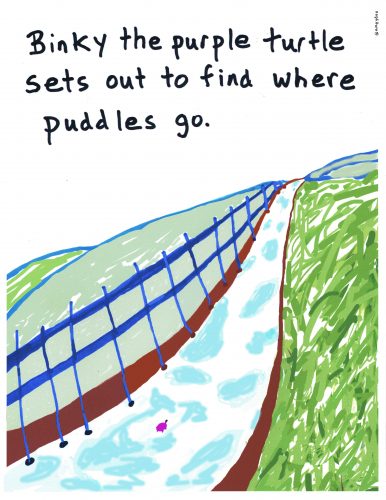 If I were a novelist, dang, the meager contents of the fridge would be plentiful, a regular cornucopia, a Thanksgiving of delights. I'd go all Don DeLillo on everything I find, and back-story my objects, front-load my POV, make Neighbor Dave a widower, or better yet, have him be discovered as someone passing for someone else. I'd have plenty to devour: socioeconomics, social lives, capital; and race would underscore it all, because this is America. Then I might add some kink, because when the plot's unsatisfying, kink helps. I could place an excerpt in The New Yorker, if I kinked up the joint, but only ever-so-slightly, since it is The New Yorker. And in a few years, I'd have myself a novel, even if it takes a few more years to prove crappy. But along the way, I'd still be hungry, and you would too. In fact, given that timeline, we could starve together.

But if I were a cartoonist—and dear Reader, amazingly, I am—I would have seven seconds to deliver a drawing that appetizes, a caption that satisfies, and a combo that makes a meal of the absurds, because there's always more than one absurdity in a good cartoon (and yes, that's a secret). Of course, since it's a cartoon you might get Neighbor Dave's hand creeping in the window, from the frame that runs the right edge of the page, not where the eye starts; or a comment about loneliness from a nameless condiment, because the imagination's creepy sometimes, no matter what we want. What's funny in the fridge? Shall we look?

There, that's funny, that thing—see! 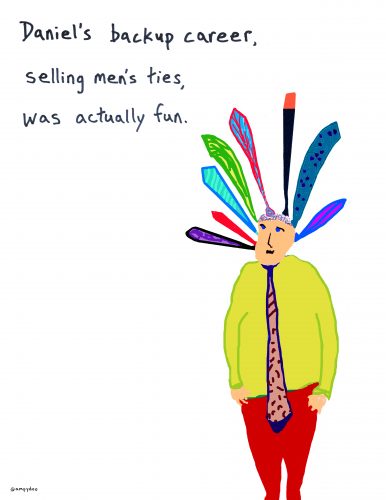 So if I do my job well, as a cartoonist, you'd laugh at that thing, which is what you should do, even though you only have one slice of bread and a sad, bad fridge, and then you'd close the fridge door because of the smell, which we'll all smell for a while longer, since life smells too. But we will have had a great seven seconds together: we laughed.

Why do I cartoon? In part, because what you've just read is how my imagination works—and as an artist, I've been pillaging every sad, metaphorical fridge for a way to honor my imagination. But I'm also interested in how your mind works, that little fridge: do you see color first, and then process the picture? Do you read the caption on the top and tell yourself a story that the image revises? Does your gaze move counterclockwise, taught by Time? What about your laughter—are you someone who guffaws, or maybe you're a titterer? Maybe you snort thrice when you can’t help it? Which cartoon style might serve your way of laughing? What color combos are funny? And when should color not be comedic? We've got seven seconds, before you close the fridge door: how are we going to spend together this tiny life?

And yes, life feels tiny to me, now that I'm here. Because in 2016, the Politics of Rage tested my values, and then COVID-19 trivialized my self-worth. And that's when I discovered a boatload of truisms, and why they're true. Futility isn't creative. Inertia actually means not moving. Loss means less. And chutes and ladders are no fun when circumstance only gives you chutes. So when the pandemic began, I stopped writing my novel... and then I stopped writing poems, my go-to for decades. 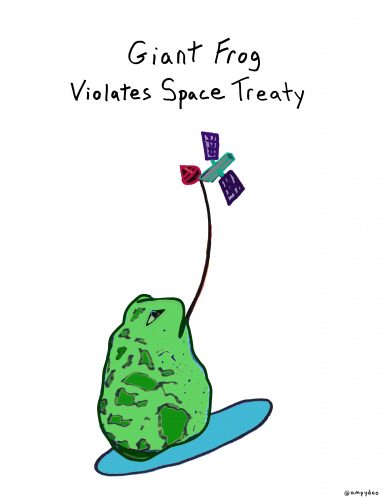 But my need to make something wouldn't go away. And so I started playing with images. And then I began to work in various pre-existing forms for almost a year—filling in irreverent Bingo cards and fictional subway maps and satirical infographics—all the while looking for new ways to make meaning. I had help, a terrific assistant (s/o Adelle Patten!) and dear family (s/o Daniel Lynds! s/o Eli Parker! s/o Felicia van Bork!). As my assistant, Adelle would do all of the digital stuff I couldn't, and her ideas were always great. But when Adelle's handwriting didn't “sound” like I “heard” the letters, I was stuck again. Because that was quite a shock—the drawings were “in a voice”? I guess I had to do it all myself.

So I started over. I worked on my handwriting, and lettered incessantly, and then began to digitize the results. My handwriting has always been awful, more an electroencephelogram than words, which meant that I had lots to learn, how to letter legibly, surely, and even expressively. And that was a moment, my own first letters that went with my own first image: a cartoon that felt like mine. My reinvention had begun for real.

Of course, that meant I was even more hooked, the autonomy of the art form within sight. The lettering soon led to scanning which led to Photoshop and working on the drawings within the limits of my abilities... and that led to color... and working on my drawing, and drawing and drawing. And composition. And drawing. And a sketchbook and a drafting table and Copic markers and blue painter's tape, and now my scanner's so overworked it sounds like a tiny frog being lightly squeezed. But the work feels like mine most days, and so I cartoon, and I like it. And I work on my drawing, which I suspect will continue until the end of days.

I guess I'm a recovering writer. Or an aspiring painter. Or a sit-down comedian. No matter the business card, I'm an artist given to the wacky—it's been one of the great journeys of my life, into the weird and wacky—surrendering at last to the power of the single page, the possibility of the single frame, and what I might achieve in seven seconds.

Join me? Shall we see what's in the fridge?

Editor's Note: New comics from Alan Michael Parker will appear in this space weekly. You can also view AMP's cartoons on Instagram at @ampydoo and on the web at ampydoocartoons.com.

Alan Michael Parker has written four novels, nine books of poetry, and coedited five other volumes. His various awards and honors include the North Carolina Book Award for poetry, multiple selections in the Best American Poetry and the Pushcart Prize anthologies, the Fineline Prize, the Lunate500 Prize, the Randall Jarrell Award (twice), and the Lucille Medwick Award from the Poetry Society of America. In 2021, he judged the National Book Award in fiction. He teaches at Davidson College, where he holds the Houchens Chair in English.