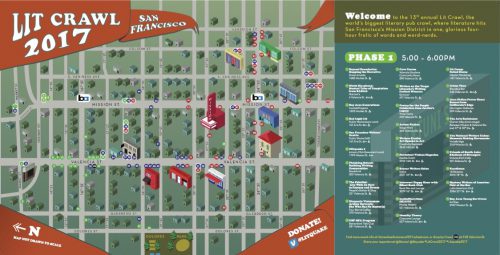 We're throwing an Identity Theory reading-party at the San Francisco Lit Crawl next month. Founding editor Matt Borondy will be the "curator," and the human exhibits will include:

Kevin Canty, who wrote a bunch of books that get songs stuck in your head (Into the Great Wide Open, Where the Money Went) and is the Director of Creative Writing at the University of Montana.

Alex Shapiro, who was one of the first co-editors of the site like a million years ago.

Judy Viertel, an educator who co-facilitates the San Francisco Writers' Workshop and has published stories all over the place, including here.

Giano Cromley, whose story collection What We Build Upon the Ruins is coming soon. Read a story we published from the collection.

Alta Ifland, who writes in several languages and has published four books, including Elegy for a Fabulous World. Read her Identity Theory story "No Gold Rush."

We'll be at the Casanova Lounge on Oct. 14 from 5-6. Apparently they have sexy paintings everywhere. So stop by, grab a drink, say hi, and wander the dozens of other cool literary happenings in the Mission District from 5-9 that evening. It may help to view a map of the events.