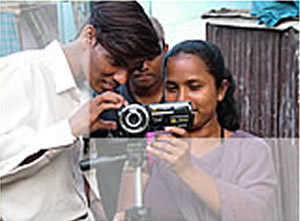 What if the poorest people in the world had their own media industry?

In a global society dominated by corporate media conglomerates and sensationalist news coverage, we forget that underprivileged voices are important not just as means to forwarding various agendas, but as ends in themselves.

Motivated by these principles, Video Volunteers has established the Community Video Unit (CVU): a community-media initiative empowering people to use the video format to take direct action on critical issues surrounding social, political, and economic development.

Based in India and New York City, Video Volunteers engages, trains, and employs community members in different parts of the world as video producers. Every month, they develop a new local-language "Video Magazine" on a timely social issue and show the films to up to 10,000 people using widescreen projectors. By communicating in a visual medium, this approach bypasses the problem of illiteracy and helps promote community-led change by engaging audiences in a "call to action" during community screenings.

Watch this example, where a film helped villagers in Andhra Pradesh, India realize how Malaria testing in their village was flawed due to bureaucratic inefficiency and let them know whom to hold responsible for this misdeed:

[redacted video due to format]

Jessica Mayberry, Founding Director of Video Volunteers, details some of her experiences with building the organization, the success they've achieved, and future goals in her interview with Identity Theory.

What motivated you to start Video Volunteers? Is this something you started considering in college? When did you start believing in this project as a career choice?

I started Video Volunteers after finishing a nine-month stint volunteering in India, where I trained communities in filmmaking. I had come to India as a Fellow of the American India Foundation. I'd worked in TV in New York: CNN, Fox News Channel, Court TV—and really felt that it was very difficult for a young person to have an interesting career in international news in the States, given how US-focused everything is, and how the media's only interest seems to be the global war on terror. On the other hand, there is the whole video journalism or Current TV phenomenon: young people heading out into the world to make their own films with low-cost cameras. In coming to India, my thought was that I myself would make films. Little did I know that the focus would entirely shift to my training communities to make films.

I basically started Video Volunteers because I wanted a way to stay on in India! I didn't want to go home. I was volunteering, so I thought, "Why not make a volunteer program for filmmakers who want to serve NGOs, who themselves need films?" We did that for about two years, but the organization has a totally different focus. Our goal now is to create a sustainable media industry at the base of the pyramid, by creating "Community Video Units" in partnership with NGOs, where community members are trained as full-time "community video producers" who make films that are decided by a community editorial board, that they screen on widescreen projectors. It's about using media to empower communities to take action; government to take action; to expand the scale and reach of social messages, and to provide the best leadership training possible for poor communities.

I began to believe in community media as a viable career choice when I saw the real need that NGOs had for media. The Ashoka Foundation had done a survey of their Indian Fellows' greatest needs, and media was very high up there. I realized it was what I wanted to do with my own life when I saw what powerful stories poor communities could produce. At one point, I was engaged in an effort to help the Asian Development Bank make a film on a NGO's water programs. This white male producer was having so much trouble getting these poor women to speak out. One of that NGO's Community Producers then took the situation in hand--she asked the professional outsider filmmaker to leave, the village women's husbands to leave, and spoke with the women as an equal, a friend, and someone she knew intimately. She got the most incredibly insightful interview! I realized, if the media is made by just one elite percent of the global population, how much of the world's reality must we be missing? We need to change this.

How did you go about acquiring funds and support?

In the beginning, yes, getting funding was hard. It still is. We believe that voice is a human right. We believe that communications, articulation and dialogue are ends in themselves, and it's hard to convince funders who usually feel that media must serve some other purpose, like water or health, to invest in our programs. But now that we've begun showing impact in terms of communities and government taking action, it is getting easier.

Why India? Why Gujarat?

India is a great place to do media, human rights and technology work. There's a lot of wealth, still unfortunately a lot of poverty, a lot of great technologists, and it has an incredibly long history of social entrepreneurship. David Bornstein, a real mentor of mine, calls Gandhi (who's from Gujarat) the first social entrepreneur. It's been a great place for me to learn from people much more experienced than me, about what's actually going to be useful in terms of advancing social change and fighting poverty.

We're in Gujarat because that's where Drishti Media, Arts and Human Rights is based. Drishti is our main partner organization in India, they've been doing incredible participatory community media work for two decades. For instance, they've set up some of the most successful community radio stations in the world.

Do you see this project having a global reach? I certainly believe your work must inspire people in other developing countries to start their own "Apna TV" (Our TV). Is this something you're working on down the road—going to conflict-stricken areas in Rwanda, Palestine, Kashmir for example?

We talk about creating a "global social-media network" of community video producers. We have 75 producers at the moment; we're one of the bigger production companies in India yet one that is one quarter Dalit (‘untouchable"), a quarter Muslim, one quarter tribal, and 60% women—the most voiceless, basically. In 2008, we want to focus on the way that these producers share and collaborate—the way they share films, but more importantly, the way they facilitate their communities to share solutions. We do intend to expand to Brazil and Kenya, but the question is when. It's about resources and bandwidth.

Please describe the editorial process. Do you work with volunteers who translate local dialects —has it been tough finding volunteers? What exactly is your role as the Founding Director? Are you involved in the day-to-day production process? Or fieldwork?

Each Community Video Unit creates a community editorial board made up of local people from the slums and villages. Community members are the primary focus of our efforts, so they decide the content of the films. We talk a lot about the difference between "NGO Media/Development communications" and "community media." For us, community media means nothing less than media that is of, for, and by communities.

The "of" part means that communities have a chance to shape the content. So, our NGO partners recognize that the topics of the film will go beyond the NGO's focus area. So, we might have an NGO that works on water, but the films can address domestic violence, or health, or education, whatever is the greatest need of that community. Or they can be music videos, or dramas—it doesn't have to all be serious. Most NGOs are fine with that—they realize that this new communications process can help them make their work more participatory.

Whenever we launch a Community Video Unit (there are 12 right now), we start by having the new Community Video Producers who are just beginning their training do a week of surveying in the villages. They go to every village and ask people, "What are the issues the media doesn't cover that you want information about?" They also do creative processes like participatory video, essentially games using the video camera with communities that demystify the technology, to help the community understand what the Community Video Unit is all about. Community members talk about how they don't have adequate access to information like health, education, livelihood and fighting corruption, and how they need and want this information. We've seen in India how the newspapers that used to be for education, for instance, are now, "lifestyle," or fashion. So we're trying to fill a role the media fails to fill.

Who is your audience? Are these videos aired on local channels?

The primary audience is community members: people residing in the 150 villages and slum areas where our Community Producers now work. The films are screened on widescreen projectors in the slums and villages. We've had 600 screenings to over 130,000 people in the last 18 months. Secondary audiences are screenings to government officials, other NGOs, conferences, film festivals, local cable networks, state television like Doordarshan. We're working on deals with mainstream stations such as CNN-IBN in India, NDTV and current TV in the US. And of course, the films are on our new online channel, Channel 19.

Talking about that, I was just going through some of the videos featured on your site, ch19.org, and it was striking to see working-class people, their hardships and efforts being featured. This is what separates your team's work from other major media outlets—the focus on the ordinary. And of course, it's a conscious effort on your part. What effect do you hope these videos have on your audience?

That's an interesting question! We find that people the world over love to see themselves and their issues reflected. It's a powerful experience for a villager to see themselves. We ask at our screenings in our feedback forms, "How many of you have seen a movie screen before?" Even 20 kilometers from a major city, the majority of the people have never been to a cinema. So their first experience of a cinema event is in their own village, and of themselves projected onto a huge screen. It's tremendously validating: "What I have to say counts"—and, we believe, it encourages a process of self-observation that can lead to behavior change and a community "call for change." Each film also ends in a "call to action"—something concrete that villagers can do on the issue. After the films, they have discussions about that issue and particularly about the call to action. Our goal is to get as many people as possible to take that action, whether it's protesting at a government office, demanding the teacher or doctor come on time, organizing a "village clean up" day, voting, or committing to educate their daughters. The interesting thing is that if you put up a screen in a village, you often get half the village there—it's a great forum for dialogue.

The website, Channel 19 (ch19.org) is very new, and frankly, I'm not too happy with it yet. It's hard to take media that is produced for one audience, poor communities in India, and make that material relevant to a global audience. I would love to have people's feedback on how we can improve the site and communicate the core message. This message is that the two thirds of humanity—those who are silenced and ignored by the mainstream media—have tremendously creative ideas and fascinating lives, and that we can all be enriched, and even entertained, by seeing and hearing their lives reflected in video.

Video Volunteers has been awarded a Tech Museum Award for Equality in 2006, and was short-listed for the prestigious Development Gateway Award 2006; they were most recently awarded an Echoing Green fellowship, and won the NYU Stern Business School Social Business Plan Competition. For more information, visit http://www.videovolunteers.org or contact Jessica Mayberry at jessica@videovolunteers.org.