Two things I don't have are a critical theory and
a theory about critical theories (known in some English lit. circles
as a meta-theory). Perhaps because I am at heart a naïve enthusiast
or because I have great reverence for the efforts involved in writing
books or making movies or creating a great piano or saxophone solo,
I shy away from the clinical dissection of cultural produce—some
people use the word 'art' here. I guess I should, too, as produce
is used for edibles.

There are things that overcome that reverence. I was, as an undergraduate,
a fan of the Norwegian Nobel Laureate Knut Hamsun, but I never read
another work by him after I discovered his pro-Nazi sympathies.
I am told Louis-Ferdinand Celine is brilliant, but his reputedly
rabid anti-Semitism leaves him off my list. But then again, this
moral turpitude standard is not a rigid measuring stick. I do listen
to the alleged Nazi sympathizer Wilhelm Furtwangler's recordings,
and I view the films of the compromised Elia Kazan. But then, that
is another digression I have fully illuminated in my notes for my
startlingly adroit forthcoming autobiography, Hitting the Fan.

Ruminating on the critic seems to be an occasional preoccupation
that flares up like a case of h-----s. Mostly, it is exacerbated
by reading about or actually reading the bad review of an author
that I have some knowledge of—like Michiko Kakutani's recent
unkindness to Don Delillo and Robert Stone. In those cases, I didn't
read her text, nor am I miffed at her, nor do I think less of her
or anything like that (in fact, in the interest of my own ongoing
Robert Stone scholarship, I may yet read her on Bay of Souls
after my own second reading of Stone’s new novel). The thing
is, I am now recalling my own past fits of ire and pique at MK and
other critics for this or that critical transgression or failure
to agree with my own apodictic judgements. But, hallelujah, I have
seen the light. No more grousing about such things. This is made
all the easier by my realization that what I found most wanting
in Kakatuni's reviews is that her writing is not interesting and
beyond that, kind of joyless.

Which means I guess I think it is worse to be boring and dull than
wrong. As I was trying out my new non-theory I chanced across a
commentary
on the new entry into the literary magazine world, The
Believer.

Three irrelevancies in two sentences is usually enough to put me
off:

For a new magazine from the Dave Eggers stable, The Believer
has had surprisingly little hype. It's quietly arrived in bookstores
without the Eggers’ name anywhere to be seen (although his
influence is obvious and everywhere felt) and is clearly attempting
to distance itself from the rapidly disintegrating Eggers bandwagon.

But I read on because, well, I want to know what the kids are doing
these days. And also because I am curious about the form attacks
on the inestimable Dave Eggers and his enterprises will take:

The bigger point is that Heidi Julavits Means Serious Shit.
…Julavits … sees this magazine as no laughing matter:
"books are my religion"

This seems to be the commentator's attempt to either mock or emulate
what he calls "Eggers High Ironic." Part of this style,
I guess, is capitalizing words other than nouns. Anyway, Julavits’
choice of words is not my cup of tea, but her heart seems to be
in the right place.

…This magazine, in contrast, is going to be a big-hearted
place, free from malice and scorn, a place where, in the immortal
words of Alice, everybody has won and all must have prizes.

…It's not necessarily a bad idea: accentuate the positive,
and let the carping sour the pages of someone else's journal. But
what is lost is any concept of a dialectic.

On the face of it, this is a logic I cannot seem to follow. Sour
carping is the antithesis of accentuating the positive? Hmm, there
are some serious categorical errors tromping around here, all in
the name of reifying the yet unproven or even unclaimed mission
of a literary magazine to forward a (the) dialectic.

And then there is this doozey of a last graf:

So is The Believer worth your $8? I can't see it,
really…To read this magazine, you first need to be able to
abide the cheap humour, then you need to get around the nasty design
(columns don't line up, one story has its final paragraph 100 pages
on from its rightful place), then you need a real desire to read
long essays about books you've never heard of by writers who are
more interested in showing off their own literary chops than they
are in actually informing you about today's culture. It's everything
that's bad about Harper's, rebranded for the 24-35 demographic.


1358 words and barely a ray of sunshine (okay, he liked the piece
on Nicholson Baker) except for this unintended, I am sure, piece
of irony, "writers who are more interested in showing off their
own literary chops than they are in actually informing you"
or useful information unless you care about the "rapidly disintegrating
Eggers bandwagon."

All this aside, let me enter some uncharted waters. Why write and
publish this within fifteen minutes of The Believer hitting
the newsstand? Why this apparent (willful?) failure to understand
that a magazine, especially one that purports to be about creative
endeavors, requires some breathing room and sunshine to flourish?
The overload of cynicism oozing from the pores of this bleeding
sore of a commentary has so little to do with trying to understand
what is being attempted and what the real world needs that it suggests
something else beyond "informing about today's culture."
But anyone's guess is as good as mine is as to what that is. If
there was trashing to be done it would have been more palatable
if it were executed with some humor and stylish word play as opposed
to this meretricious droning. 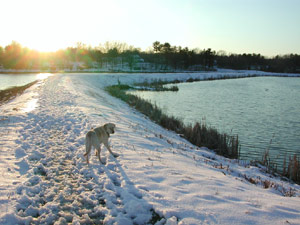 April 5th on the Squamscott River