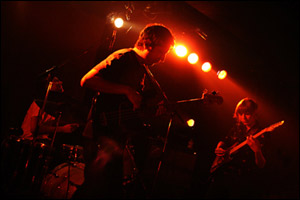 Recently, San Diego has become one of the country’s musical breeding grounds. Bands like Pinback, Castanets and GogoAirheart have surfaced, one after another, each with their own, unique voice, each representing an entirely different genre of music. Among the first of all these groups was Tristeza, an instrumental quintet (two guitarists, bassist, keyboards, drummer), who decided not to represent a genre, but create one.

Tristeza formed in 1997 and has spent the last eight years prolifically releasing music on labels such as Rocket Racer, TigerStyle, Gravity Records and others. Without ever receiving significant press, they have created a distinct name for themselves in the music community and are often used as a reference point (i.e “the Tristeza sound”) in the music press. Members of the Tristeza have even played with such seminal bands such as The Locust, Strictly Ballroom and Swing Kids.

Their new album, A Colores

, on Better Looking Records, is a lush documentation of the most recent development in their musical direction. It is the first recording of their new lineup (new guitarist and keyboardist), which came about in 2004, after James Lavelle, the previous guitarist, left the band to pursue his electronic-based project, Album Leaf.

The sound of A Colores is the sound of the creative process. More than before, their compositions intuitively unfold in long chains of lyrical guitars, pulsing rhythms and sweeping keyboards, giving the seamless impression of improvisation.

“All of our music derives from an improvisational path,” said keyboardist Sean Ogilve. “Generally speaking, all our work comes from a musical idea or a few musical ideas that one or a few of us has come up with. We then bring these little kernels to the group as a whole and we pound them out and develop them through improvisation. The difficulty then is, of course, the sifting through and filtering out the parts that don't really work.”

A lot of people might shove the sound of Tristeza into the genre of post-rock but the band considers “Psychedelic” to be a more appropriate descriptor. In fact, the heavy, dirge-like quality of most post-rock can’t be found on Tristeza’s records. Instead, their music conveys warmer, more atmospheric moods, cinematic in scope and pop-oriented in its melodic guitar hooks.

“We spend a lot of time trying out, recording and listening back to the way parts fit together.” Says Alison Ables, guitarist. “It could be a lot easier if the music was always the same, but we play songs differently each time, which is more interesting and can be fun. But the difficulty in structuring them is in the execution and in seeking the proper dynamic for each melody, pattern, and progression. Also, parts can change a great deal--even after two months on the road--making it hard to keep a solid structure.”

Unlike many of the bands in the current instrumental music scene, Tristeza rarely experiments with electronic sounds, preferring to capture the quality of “a live and viable soul.” Both their live performances and their recordings carry the intensity of rock without ever reverting to the overused box of rock tricks--guitar solos, crescendo rock, verse-chorus formats--and sometimes even alluding to their wide variety of influences, such as trip-hop, hip-hop and bands like Red House Painters.

“I respect musicians who play all of their music live,” says Christopher Sprague, guitarist. “We do use computers for manipulation and recording but never in a live setting. I hope to keep it that way."

“Of all the laptop bands out there,” said Ogilve. “There are few who really come close to having the same impact on us as a completely live group.”

These sorts of attitudes toward music have allowed Tristeza avoid trends in electronic, instrumental music and create something timeless, amorphous and powerful. When asked where they fit into the music world of the past, present and future, Ogilve said:

“The thing about original instrumental music like this is that it's completely subjective, in its classification and its listening experience. I think that we enjoy that.”