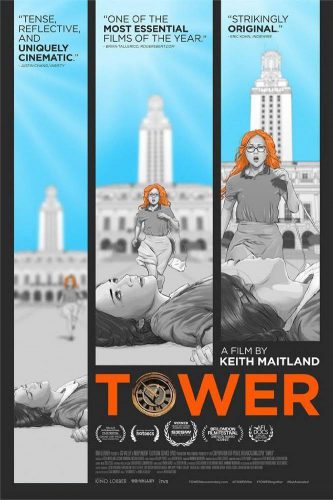 The talking-head subjects are played by actors for a majority of the film, which is especially noticeable given that its narration comes exclusively from witnesses (a la Errol Morris). Dreamy rotoscope animation makes up most of the film’s visuals, including the testimonials. These flourishes call into question the nature of documentary as a representation of reality, and culminate to lend touches of the surreal and the sublime to historical tragedy.

The decision to experiment with broadcasted truth is especially bold given the film’s subject: the 1966 mass shooting at the University of Texas that left sixteen dead and three dozen wounded. At its best, Tower’s skewing of subjectivity raises big questions about art, trauma, heroism, resolve, and absolution. At its worst, it begets a toothless and irresponsible film that valorizes victimhood and wanly suggests that bad things bring out the best in people.

The film’s stumbles are somewhat smoothed out by its commitment to its primary sources, and it ultimately finds power in giving the survivors a platform on which to build a network of healing. When the film breaks free of its own conceits, it finds an impactful and relevant emotional core.

Tower tweaks the documentary formula by bringing dramatization into every facet of the storytelling, reserving the opportunity to see or hear the actual survivors for the latter half of the film. In lieu of the standard witness interview format, animated avatars of the survivors as they appeared in 1966 speak their words via voice actors in addition to appearing in the standard dramatization of the event. This disconnect between the audio and visual cues of documentary has a spiritual analogue in Rodney Ascher’s Room 237 (2012), which did away with showing its interviewed subjects to accentuate the theme of breaking with reality and immersing oneself in conspiracy theories surrounding The Shining (1980).

Maitland’s decision to use rotoscope animation, a medium of illustration over actual photographic moving images that presents the viewer with an uncanny representation of reality, also serves a disorienting function. The director is no stranger to this technique, having used it to similar ends in his 2009 documentary The Eyes of Me. The literal blurring of reality in Tower suggests sensory overload in times of crisis, or the trickiness of memory in revisiting trauma.

Perhaps these fissures between history and its retelling are meant to provoke in the audience the same de-centering experienced by the storytellers. And perhaps the use of actors for the testimonials provided some respite for the survivors from having to bear too much of the weight of their guilt and pain on camera.

All told, Maitland’s stylistic choices (as director, DP, and art director, the visual direction is very much his) are commendable for the thematic purposes they serve and do not do too much to distract. The problem they pose stems from the film’s watered-down reckoning with the pressing issues raised by the Austin tower shooting. In a film that refuses to address villainy and its context in the service of celebrating heroism, the hyper-dramatized format pushes the needle slightly towards empty spectacle.

To be sure, Tower glows with the kind of heroism that represents the best qualities of humanity in spite of its worst. The officers and everyday citizens who threw themselves into the line of fire to put an end to Charles Whitman’s rampage, or to comfort and protect its victims as it unfolded, deserve to be honored. The survivors agreeing to share their pain on camera are themselves committing an act of sheer bravery. But the film refuses to put this everyday heroism into context, turning a blind eye to Whitman and focusing all of its energy on the witnesses instead.

The closest the film comes to understanding its villain comes from the real-life Claire Wilson, who lost her unborn child and her boyfriend in the massacre, but who cannot help but wonder what Whitman was like as a child and declares a matter-of-fact forgiveness for him. Incidentally, Wilson's story is the emotional linchpin of the film throughout and provides some of its most complex and emotionally wrought testimony.

While avoiding Whitman is an understandable choice in terms of wresting any power over the narrative away from him, this decision also opens the film up to wider critique (perpetuating the nation’s legacies of ignoring veteran’s health affairs and clinging blindly to its right to inflict violence, for starters) and causes the film to fall just short of its mark. This blindspot would be easier to forgive if not for some proselytizing in the form of a closing montage of recent mass shooting news footage backed by Walter Cronkite’s thoughts on the Austin shooting and lax US gun control laws. As a result, the film falters when trying to draw meaning from its subject.

Despite this misstep, Tower provides some haunting moments, and its efforts to enter a national conversation should not go ignored.