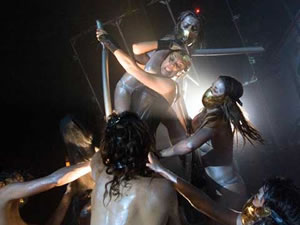 The Catalan performance collective La Fura dels Baus has remained one of Spain’s most compelling and relevant artistic exports since its founding in 1979. The story its performances tell, though, has never really been nearly as important as the way in which that story is staged. Perhaps it is for this reason that, more often than not, throughout the course of La Fura’s well-decorated history, the collective has staged updated and, at times demented, versions of well-trod plotlines: One recalls their controversial staging of The Magic Flute in London, their production of The Metamorphosis in their native Barcelona, or their almost viral series of reproductions of Faust, culminating in 2003 with the psycho-horror film Fausto 5.0.

Imperium, their latest effort—it opened in the spring in Beijing before returning home to Barcelona—takes no text in particular as its foundation, and yet the tale it tells is, at a glance, as perfectly canonical as any of the aforementioned.

Imperium offers a now classic complaint against empire and American-style capitalism in the new millennium, and a familiarly cynical assessment of the ultimate futility of human history. The story begins with a terrorist attack followed, as it has been perhaps more in our country than theirs, with a redoubling of the machinery of oppression and repression.

This is followed, no less predictably, by a revolution on the part of the victims of that machinery. It is as violent and uncompromising as revolutions tend to be. One representative of the old guard is hung from a meat hook and wrapped in cling film.

When the old powerless become the new powerful, however, they behave accordingly. The machinery of oppression and repression is put back into place; by hook and by crook, a new working underclass is robbed of the value of its labor by the new profit-makers.

As one imagines would be the case, it is not long before the members of the new generation of oppressed and disempowered arm themselves for their own revolt, and, not long after, violently overthrow their oppressors. For a moment, it seems that all will end well, that this history in miniature will turn out to have ended in justice and in freedom. But soon enough—as though we could not see it coming already, or have not already seen it come before—the revolutionaries begin to fight amongst themselves in an effort to determine who will hold power in the post-revolutionary society to come. Then—as though we could not see this coming already—they kill each other one by one until, in the end, two remain.

What comes next is so predictable that it hardly needs to be specified: simultaneously, in a moment of anti-climactic climax, the last two revolutionaries standing, each having fought her way to the top of a great pyramid of metal piping and translucent plastic, strike each other dead, falling limp and lifeless into one another’s arms. 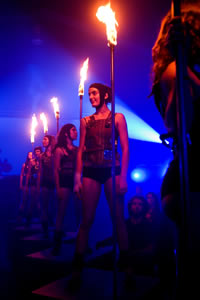 But if, in the story Imperium tells, it is at every point perfectly obvious what is coming next, what is perhaps most remarkable about the staging of it is that, from the opening shot—literally, an explosion, followed by a rain of debris that is, if in the end harmless, nonetheless jarring in its substantiality—the audience, claustrophobically confined within an open space the size of an airplane hangar, never knows what’s coming next, or from where.

Through a long, dark hallway, the audience passes not into the space in which they will watch a staging of Imperium, but rather into the very space of that staging. As has been the case in many of La Fura’s most celebrated pieces, the audience is part of the staging, but they never quite know what their role is, and perhaps this is what makes the experience so intense, or what makes the audience, from the moment of its arrival into the belly of the beast, so profoundly vulnerable.

After the simulated terrorist attack that, on the heels of an uncomfortably long wait, sets the production into motion, most of Imperium’s action takes place on or around three mobile stages, each of which will eventually comprise one-third of the pyramid atop which the show’s anti-climactic climax takes place.

All of the performers in Imperium, as it turns out, are women, but during the show a troupe of burly men undertake the labor of pushing and tugging and pulling the stages on and around which those performers ply their craft. Because most of the action implicates the audience members in one way or another—buckets of fake vomit, likely bread mixed into water, are hurled, watermelons are exploded, and so on and so forth—they scatter whenever a stage approaches. Although the capacity crowd for Imperium is small enough to allow the stages to be moved, it is big enough that audience members cannot flee freely, but, rather, must negotiate their way through and around one another in their ultimately futile efforts to escape.

Thus, one watches—or unwittingly participates in—Imperium trying and failing to flee from what approaches, while at the same time never quite sure what might be coming from behind. It’s an experience that, I suspect, says much more about the subjective experience of empire and late capitalism than Imperium’s rather predictable narrative. 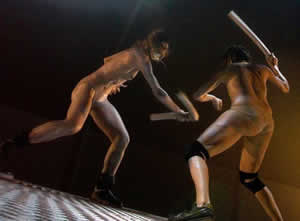 As it turns out, I pay for the summers in Spain during which I occasionally see things, such as the latest performance of La Fura dels Baus, by toting around an annually rotating group of well-off American adolescents for a month on behalf of a well-known travel company.

People usually offer groans of sympathy when I tell them this, but in truth it’s not so bad. There’s nothing quite like being responsible for somebody’s, or something’s, safety and well-being, to cause you to feel a bit of affection toward it, which is why, I suppose, we love our children and our pets so much. I don’t have any children, as of yet, and I don’t love the kids I tote around in the summer as much as I love my pets, but for a month or so I am at least partly responsible for their safety and well-being, and for that month, at least, I am accordingly tolerant of them, and even fond.

This past summer, I took a group of seven girls and six boys to Imperium, in Barcelona. From the opening explosion, the girls were predictably terrified, and the boys, who had been promised a show about “terror” and “violence,” predictably bored and dissatisfied. In the scene in which the performers are arming themselves for what is the show’s second rebellion, however, the performers who play the oppressed during the show’s second regime strip naked to the waist and, marching in place in their black combat boots and not much else, smear themselves head to toe with silver paint. This was the end of the boredom and dissatisfaction for the boys, who for all their airs had probably never been as close as they were then to breasts made out of actual flesh.

In the darkness, and amidst the chaos, I lost track of most of my kids during the course of the show, and when I found them again out in bracing bright light of the lobby, some were worse for the wear. One girl was crying, because flying watermelon had stained her white blouse. Another, dressed in self-satisfied black, massaged her arm gently. A boy, meanwhile, had at a certain point tripped over somebody’s feet, slipped on a splatter of fake vomit, and fallen hard onto the concrete floor, lacerating his right arm at the elbow. At the time, so the story went, he had been madly trying to keep pace, during the battle sequences that immediately followed the period of marching in place and paint smearing, with the topless performer he’d found most attractive. Now, as we passed as a group through the theater doors out into the warm summer Barcelona night, he held up the bleeding elbow for me to see.

It was an interesting moment: After a show that seemed to have had plenty to say about what is not, in the end, worth fighting for—freedom, justice, that sort of thing—here I had somebody at last telling me what was.

When he is not visiting his parents in Milwaukee, Wisconsin, Eli S. Evans splits his time between California and Spain. His writing has been widely published, in magazines such as n+1, in the United States, Dreams that Money can Buy, in the UK, and Quimera, in Spain. A book of essays is forthcoming in 2008.