Early September 2021 is bringing the heat. (Does this post already sound like a commercial for a blowout Labor Day sale?) The expected high temperature today—September 7th—is 108 degrees here in southern Nevada. But that's nothing. These six new books hitting the shelves today are actual fire. 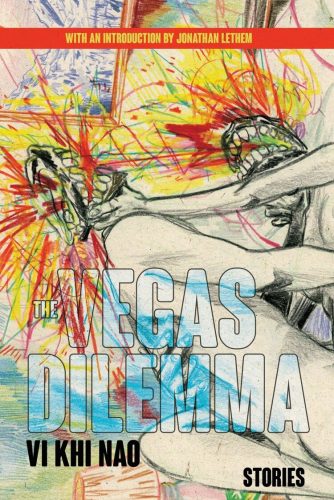 The Vegas Dilemma is new collection of 27 stories from local (to me) author Vi Khi Nao, a recent Shearing Fellow at the Black Mountain Institute.

"Connected by themes of alienation, bad romance, and microaggressions, The Vegas Dilemma combines the inventiveness of fiction and the richness of everyday life to show that such American tragedies as Trump’s ascendency and the Weinstein scandal aren’t divorced from everyday interactions, but arise from them." (11:11 Press)

So much good stuff has come out of my former home of Gainesville, Florida, including Tom Petty, Satchel's Pizza, and pretty much everything Lauren Groff writes. Matrix is Groff's highly anticipated new novel.

"Lauren Groff's Matrix is an inspiring novel that truly demonstrates the power women wield, regardless of the era. It has sisterhood, love, war, sex — and many graphic deaths, all entangled in a once-forgotten abbey in the English countryside." (NPR)

A Play for the End of the World by Jai Chakrabarti

A Play for the End of the World is the debut novel from Indian-American (or Indian-Brooklynite, if you want to be hyperlocal) author Jai Chakrabarti, an Emerging Writer's Fellow at A Public Space.

"Jai Chakrabarti weaves a captivating tale from the threads of history. Jaryk Smith, nearly 40 years old, managed as a young child to escape the grasp of the Nazis. Decades later, he finds himself still guarded, guilty to have survived when so many did not. A Play for the End of the World follows Jaryk as he falls in love in early 1970s New York City, then unexpectedly travels across the world to eastern India, where children amidst a local political upheaval are set to perform the very same play he did as a child in a Warsaw orphanage. Jumping back and forth in time from the early 1940s to the early 1970s, Chakrabarti unravels what it means to survive, how art influences life, and how the past has an uncanny way of echoing into the future." (The Nerd Daily)

Martita, I Remember You by Sandra Cisneros

A new Spanish-and-English novella from the undisputedly great Sandra Cisneros.

"A Chicago woman discovers old letters from a long-lost friend she'd met as a young adult in Paris, leading her to recall friendships forged in the yearning days of her youth ... Tightly written, unfolding in a controlled spool of memory, the story is told in a combination of correspondence and narrative vignettes; its length is closer to that of a long short story but it works as a stand-alone volume, especially as it's paired with its Spanish version ... A tale both beautiful and brief." (Kirkus)

A new memoir from the Poet Laureate.

"In this triumphant memoir, our three-term Poet Laureate lyrically fuses poetry and prose to capture her Creek Nation family. Harjo considers the myriad forces that made her, from the devastating abuse of her stepfather to the classmates and writers who shaped her literary path." (Esquire)

Beautiful World, Where Are You by Sally Rooney

I got an email (Substack actually) about this one from Brandon Taylor this morning, something about Rooney Tunes and Ikea. Taylor's NY Times review of Sally Rooney's new novel goes like this:

"There is an argument to be made that Beautiful World, Where Are You is the kind of plotless un-novel we’re growing accustomed to. The characters banter about the uselessness of modern structures and our lack of faith in overriding narrative. While the techniques of modernism and postmodernism have been borrowed, assembled and arranged like items selected from an Ikea catalog, the contemporary un-novel has none of modernism’s or postmodernism’s desperate crisis of faith. That is, Beautiful World, Where Are You is carefully formless and its characters are fluent in our lingua franca of systemic collapse, that neoliberal patter of learned helplessness in the face of larger capital and labor systems."

Speaking of Substack, I've been goofing around with writing a non-self-helpy self-help newsletter called "Not Self-Help." My first piece of so-called advice: don't be authentic.

Other Substacks I've started reading this week include "Destroy Your Safe and Happy Lives" by Ron Hogan and "Why Be Happy When You Could Be Writing" by Amber Sparks.

Don't be happy. Don't be authentic. Read our Substacks.

Speaking of being not-happy...R.I.P. Jean-Paul Belmondo and Michael K. Williams.