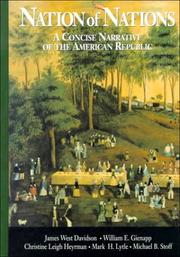 I'm a few hours away from getting on a long cross-country flight, and naturally I've brought a book to read.

It's not a new book. In fact it's probably the oldest, most beat-up book I own: my high school U.S. History textbook, Nation of Nations.

I love the book for two reasons. It's unusually well-written for a high school text, but more, Dr. Ochs' history class was a demanding right of passage for every student at my high school, so the book and its curled pages is a kind of prize. No other teacher dared to cover a 1,070-page textbook in nine months, to give quizzes every class on the previous night's reading, and then, partway through the year, to tack on Saturday morning classes for his A.P. students.

So when I picked up Nation of Nations two weeks ago to start rereading it, I was immersed again in the feeling of accomplishment that came the first time. And because so many years had passed and I've seen so much more of this country in person, stories from Lexington and Croatoan were even more meaningful.

But re-reading other texts, even ones that provided the same feeling of accomplishment, can be a totally different, even crushing, experience.

I once tried to re-read John Steinbeck's East of Eden, the book that first got me to love literature. And I couldn't get through the first chapter. I could hardly believe it. I thought the writing was awful, the characters flat, the premise almost silly.

And it hurt. From the first time I read East of Eden to the second, I had read nearly everything Steinbeck wrote. I had made a pilgrimage to his hometown in California, seen Monterrey Bay, seen Big Sur, seen everything that had to do with Steinbeck. And then, because of ten minutes of re-reading, the foundations of my adoration, of my love of writing, were ripped up.

I haven't read a word by Steinbeck since.

Finishing a book is like breaking up. And re-reading a book, it turns out, holds the same risk as getting back together. One the one hand, you could rediscover what you think you're missing in life, fill a gap, be reminded of happy times or of losing yourself in something else. On the other hand, you could realize how much you've changed over the years--or worse, doubt the very continuity of your own life story.

We think and talk about our lives as if they're represented by a straight thread connecting past and present. But when we're able (or forced) to look back with clear eyes or through a prism like a book, we can't explain how we got here.

Or really, what does a book know that he doesn't?

1 thought on “The risks of re-reading”