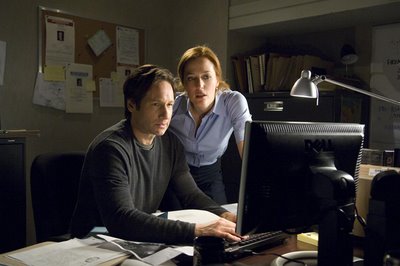 Mulder and Scully: (Not Quite) Together Again.

At its most compelling, the series The X-Files problematized the nature of objectivity and reason. In its near decade-long run, the show contextualized logic as a source of conflict between the rationalism of science and the empiricism of psychology. These conflictual differences manifested in debates about what constituted evidence and proof -- which, then, created arguments about what defined knowledge and truth.

The show took these pragmatic and philosophical problems and hypothesized about a world composed of paranormal matter, a darkness that wasn't always defined in opposition but often in apposition to epistemic and scientific norms. This kind of metaphorical thinking served as a prelude for other debates, particularly about faith, ethics, secrets, and even about definitions of clarity.

Generating this epistemological ambiguity were two FBI agents, an Oxford-educated psychologist with a taste for Jungian theoretics, Fox Mulder (David Duchovny), and Dana Scully (Gillian Anderson), a forensic pathologist and physicist committed to her faith. Once paired, they searched the natural world to understand how human life was affected (even composed) by mutations, aberrations, and other kinds of biological irregularities, including extra-terrestrial life.

In their investigations, these companions were assisted by a coterie of lowly and highly placed operatives, ne'er-do-wells, and even sympathetic aliens. At the same time, their efforts were counterposed by soldiers and assassins employed by a league of lethal men in smoke-filled rooms. Unfortunately, the cost of their investigations was high, for their allies were subdued, silenced, murdered. Mulder and Scully sacrificed greatly. Their careers suffered. Family members were killed. Both nearly died. Sadly, their triumphs were few.

In the moral universe of TXF, villainy was unequivocally identified with the power of government, for well-placed government men conspired to conceal the alien presence from a slumbering world. For these conspirators, deception and murder became necessary principles, so people could govern human affairs without the knowledge of a pending invasion. But there's little need to summarize further the show's mythological arc because, from the very beginning, the series focused on Mulder and Scully, the roles they filled and the beliefs they embodied. Mulder, because of his experiences, believed in the probability of extra-terrestrial life; Scully, working within the security of science, was the mechanist.

Along the way, they developed an empathic understanding of each other, and their relationship changed. Indeed, the show emphasized their growth: the respect, the admiration, the love. As they immersed themselves in the phenomenology of conspiracies, they didn't surrender to the disfiguring deceptions of their enemies because they stood on common ground, pursuing virtue by trying to understand the shape and scope of paranormal matter in relation to the reach of the conspiracy. Despite their common pursuit, the show was largely about their differences. Their distance. Their dialectic. They examined phenomena from different premises to balance their competing perspectives. To their credit, their salvation depended on their intellectual curiosity, their yearning for discovery, and their search for truths.

In X-Files: I Want to Believe, the new big-screen continuation, the story begins six years after Mulder and Scully have left the FBI. After years of paying a heavy price for working in the shadows, Scully opts for meaningful work as a pediatric surgeon at Our Lady of Sorrows hospital while the seemingly unemployable Mulder marginalizes himself as a recluse. Although they are together, they are apart -- even somewhat fatigued. In this post-alien world, a desperate agent (Amanda Peet) consults with them on a missing agent. This context allows them to confront social problems from the zeitgeist -- pedophilia, stem cell research, and cloning (a recurring theme in the show) -- as a way to examine the questionable reach of human science. The director and co-writer Chris Carter and co-scenarist Frank Spotznitz reconceive the Frankenstein mythos to unveil a thematic and moral contrast, one that eventually defines Scully’s potentially radical medical work with that of a killer hunting for unwilling donors to recompose his dying lover.

Though the film shifts its philosophical battle away somewhat from the paranormal, the show's focus on pragmatic problems remains. TXF regularly contextualized Mulder and Scully's work against the limits of normative behaviors and conventional thinking. In the film, individual initiative is opposed by groupthink. Consensual thinking often mutes dissent because the bureaucracy -- even medical review boards -- spurns principled risks. Near the end of the film, Scully realizes that she must argue and behave in ethical ways that move her beyond accepted norms, so she can save the life of a dying patient. Predictably, Mulder returns to his familiar form pursuing the shifting thresholds of empiricism so he can find himself again. By this standard, both are willing to take risks, but they are, indeed, far apart because they are moving away from each other.

Critics, as well, have distanced themselves from the film. Some critics conceded that they were fans of the show but argued that the film lacked the ordinary dynamism of a regular episode. Some observed that Mulder and Scully spent too much time apart to really bring the film alive (were not quite sure if Mulder and Scully live together or where they live). Thus, the basic focus of the story is decentered. Of course, this decenteredness is the point. Their relationship requires distance if it is to work at all, so the film concludes with Scully mulling an important yet risky decision apart from Mulder. This recurring theme of distance has been a prevailing one of the show, a distance new viewers would not likely understand. Certainly, the film suffers from periodic plot problems, but this theme of being apart is not one of them.

With IWB, Carter and Spotnitz developed a stand alone project unlike the previous film, The X-Files: Fight the Future. Their thinking was that new audiences would better embrace a film that was not connected to any kind of alien-based theme. The problem with this approach is that the popular alien conspiracy was ancillary to the show's focus on Mulder and Scully, and new audiences will not quite understand their complicated history, for these two are incompatibly drawn to each other but cannot be together because of their differences.

Their lack of compromise becomes clear in IWB, so we're left with two endings, a thematic one, and the other, a fantasy. In the former, their distance is emphasized, an ending to which few have warmed. In the latter, shown after the credits, this distance is bridged. In the context of this joke, Carter argues that only in an appended fantasy can a more lasting union be formed, a resolution suggesting that broad poetic license and metaphorical thinking are ways to broaden the areas in which epistemic differences can reside.

X-Files: I Want to Believe is available from 20th Century Fox.