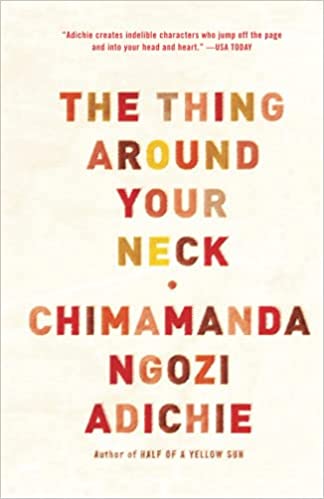 In The Thing Around Your Neck, Chimamanda Ngozi Adichie’s first collection of short stories to follow her award-winning novels Purple Hibiscus and Half a Yellow Sun, headstrong girls and women make the best narrators—they’re sassy, agitated, and predisposed toward action once their inner injustice detectors calculate the full measure of their circumstances. Whether their subjugation is political, familial, romantic, or cultural, Adichie’s headstrong and heartstrong heroines reach a point where they take action to loosen whatever is choking them. That their actions are often risky or severe, and still seem inevitable, is a testament to Adichie’s empathetic storytelling.

Five of the stories depict Nigerian wives and students tilting against various indignities in the U.S.; one searing story takes place at “African Writers Workshop” near Cape Town, South Africa.

The six Nigeria-based stories in The Thing Around Your Neck deal with political upheaval and private loss. “Ghosts,” the lone story with a male protagonist, is a poignant meditation on the fallout of the Biafran War by a retired math professor. It feels a little wispy next to the verve of the female-narrated stories—the professor is looking backward, whereas the women are all struggling to move forward.

The U.S.-based story that most deeply explores the complexity Africanness in America is the title story, “The Thing Around Your Neck,” in which a young Nigerian’s woman’s “uncle,” a relative by marriage, sympathizes with her about her Maine community college classmates’ “mixture of ignorance and arrogance” before exhibiting some arrogance of his own. The narrator, one of the least privileged of Adichie’s headstrong young women, strikes out for Connecticut and lonesomeness. She barely supports herself working in a restaurant whose customers respond to her accent and appearance by recounting their love of elephants. When she meets a white American who has actually visited African countries, and who knows enough to toss around tribal names and engage in non-safari conversation, the narrator thinks: “You wanted to feel disdain…because white people who liked Africa too much and those who liked it too little were the same—condescending.” The story’s cross-cultural romance yields moments of affirmation and challenge, including a bravura conversation in which the heroine debunks her lover’s use of the phrase “real Indians.” Race provides the surface tension in this story, but in the end it is the characters’ class and family attitudes that create the story’s deepest conflict.

Adichie’s narrative voice is confiding and psychologically insightful, and her protagonists often try to imagine the thoughts of other characters—they are not myopic, all-about-me whingers. In “Cell One,” a smart younger sister is scornful of her older brother’s misdeeds, and fretful about his incarceration for a crime he may or may not have committed. As the family makes increasingly fraught pilgrimages to Enugu to visit him in jail, she bears acute witness to her parents’ worry and her brother’s transformation; the story is as much about them as a depiction of her own loss of innocence. In “A Private Experience,” a Hausa Muslim onion seller leads an Igbo Christian medical student to the safety of a “small small shop” during a murderous riot in Kano, Nigeria.  Their shared refuge brings about a shared intimacy that would never occur in normal times. The women in these stories may be headstrong, but they are not insular or insensitive. It is their sensitivity, and their meticulously garnered observations, that lead them to assert themselves.

In many of the stories Adichie’s theme of self-definition hinges on language. The husband in “The Arrangers of Marriage” ceaselessly lectures his newly arrived Nigerian wife on the importance of using American expressions instead of the British English they learned in Nigeria; he even instructs the gobsmacked Chinaza to go by “Agatha Bell” (her given English middle name plus his made-up American last name) to get ahead. Chinaza/Agatha’s mystification at this renaming strategy intensifies when she learns that her go-getting African-American neighbor goes by a Swahili name she chose at eighteen. There are several of these head-spinning exchanges about African identity between Nigerian expats and African-Americans in the U.S.-based stories. Occasionally Adichie’s depictions of obtuse or know-it-all American attitudes toward Africa verge on caricature (she dubs a condescending American community college who shakes his head over decolonization “Professor Cobbledick”), but most of the time the awkwardness feels all too realistic.

Adichie, who usually eschews direct autobiography, uses a story-within-a-story structure in “Jumping Monkey Hill,” her almost farcical account of an ingénue Nigerian writer’s experiences at an “African Writing Workshop,” a story which she cited in a recent interview in Poets & Writers as containing some real-life dialogue. Adichie introduces the workshop director thusly: “an old man in a summer hat who smiled to show two front teeth the color of mildew.” Ouch. But if there’s a real Edward who said half the things the fictional Edward says in the story, he probably deserved the green teeth. The framing story of the workshop burns the page with outrage and satire, but the most memorable story is the non-farcical, embedded one, in which a mirror character, another of Adichie’s estimable headstrong young women, knows what action to take when enough is enough.

The stories in The Thing Around Your Neck read so smoothly that it's easy to miss the craft beneath the prose. Adichie’s descriptions are rich without being lardy, and she uses repetition with intent. In “On Monday of Last Week,” a Nigerian nanny repeatedly uses the phrase, “He’ll be fine,” to calm a worrywart American dad about his over-scheduled son. When the dad uses the same phrase to calm his wife, whose febrile attention the nanny craves, the transference feels like a theft. This technique is elevated to poetic effect in the collection’s most haunting story, “The American Embassy,” where the image of splashed fresh palm oil is transmuted through five lyric yet harrowing repetitions, the last of which illuminates the decisive moment in the story with scarring vividness.

My only quibble with the collection is that many of the story titles do not evoke the text in retrospect, but the last story, titled “The Headstrong Historian,” is an exception.  It portrays several generations of cultural shift in a Nigerian family, ending with a historian granddaughter who rejects her missionary upbringing and reforges her African identity in honor of her grandmother, who was headstrong. It’s a good jumping off point for reading the impeccably titled Half a Yellow Sun, Adichie’s definitive novel of the Biafran struggle.