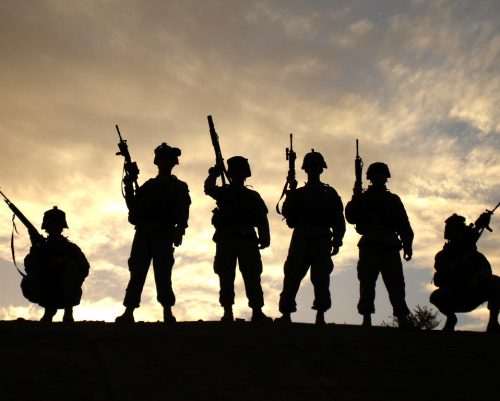 Desert Storm (or Gulf War I, or Cheney’s War I, or whatever you want to call it) was the original sin of the sorrows to follow, the war that led to Forever War. Mistakes were made, as they say; Desert Storm was America’s first and favorite war mistake of the post-Vietnam era.

But our thirty-year preoccupation with Iraq isn’t the only legacy of Desert Storm. On this Veterans Day, as we rush to thank a vet for their service, we should give the linguistic legacy some reexamination as well.

Those old enough to remember may recall the atmosphere surrounding Desert Storm. It didn’t much matter who the enemy was (after all, no one had attacked us). Many Americans at the time couldn’t differentiate the aggressor (Iraq) from the victim (Kuwait) from the potential next victim (Saudi Arabia; you remember them: our “great friend” who gave birth to Osama bin Laden and most of the 9/11 terrorists). Identity of enemy didn’t matter in 1990, just the fact that there was an enemy, and that America could easily crush them. What we were ripe for in 1990 was a national do-over from Vietnam, and Desert Storm smelled like a victory parade from the start. Here was a war we couldn’t possibly lose, a mustachioed dictator who was easy to hate, and an American general who was easy to love.

What is largely forgotten now was the emotional aspect of this post-Vietnam national do-over. I choose to believe it came from a good place and was the product of a dialogue that went like this: Boy, we treated those Nam vets poorly, didn’t we? Never even thanked ‘em or nothing. Drafted ‘em, sent ‘em off to die, and if they made it home we ignored ‘em, at best. The Nam vets were dogs who got beat too much, and the country knew it; a decade later, Springsteen called it out in song and the nation sent that platter-that-mattered all the way to #1. By 1990, our good land of good people needed a military victory, but, even more, America badly needed to demonstrate that it was, in fact, a good land of good people.

So at the close of Desert Storm, the country tied itself up in a yellow ribbon of silk and beer. Those troops came home to public celebrations, pretty great discounts at Red Lobster, and a whole lot of this new phrase: “Thank you for your service.”

Am I poking fun at any of this? Not really. That’s how returning soldiers should be treated by their nation. And those Desert Storm discounts lasted a good three or four years, so I personally benefitted from them, both before and after I deployed to my own little, largely ignored war in Somalia.

The “thank you for your service” thing, though.

I want to be careful here, because I believe that any expression of thanks is a moment of grace to be acknowledged and appreciated. I also know that most civilians who say it truly feel it; they are thankful, grateful, or just simply impressed that I did this thing that they did not do. While they have no obligation to have done it, they’re genuinely happy that I took it on, in the same way that I am not a volunteer fireman but I am deeply grateful that some of my neighbors are, and there is a potential that their volunteerism could cost them their life in trying to save mine.

As a veteran, I do appreciate your sentiment. But you don’t have to thank me in words; I’ll take action over talk any day. Thank me for my service by supporting a strong and sustained Veterans Administration and politicians who ensure it receives real funding. Many of my brothers and sisters don’t need your thanks, they need your help.

If you still want to say something—and that’s fine, really; and yes, I do appreciate it—I have a much better phrase you can use, born from our least-favorite mistake, Vietnam.

Vietnam Vets, largely unthanked by a thankless nation, took matters into their own hands and invented their own phrase, born of a small but critical distinction that further set them apart from vets who preceded or followed their war. Vietnam deployments were by person, not unit, so the vets mostly all came home individually, rather than as members of a returning Division or Brigade. When hundreds of returning troops all show up at an airport at once, it’s hard to miss, and no matter what you might think of the war or the politics, odds are good you’ll make a nice fuss. Nam vets, though, largely came home in dribs and drabs, walking alone off a plane with their duffel, buying themselves a beer in the terminal bar, lighting a smoke, then ducking alone into a cab for a lift back to the world. So what many Nam vets started doing—five, fifteen, now fifty years after their own time in-country—was to greet each other with a simple, “Welcome home.” They designed it themselves, a kind of beautiful middle-finger to the rest of the nation: if you people aren’t going to welcome us home, we’ll welcome ourselves. Welcome home, brother (or sister). Even if no one else does, I know what you went through, I’m glad you’re alive, I’m glad that you made it back.

If in the course of conversation you discover I’m a vet, rather than thank me for my service, just welcome me home. As our Vietnam vets have proven, it’s never too late. Those deceptively simple two words pack all the punch you need: an acknowledgment that I served, that your journey was different from mine (as all of our individual journeys are unique), and that you are happy that I survived to return.

If you really want to thank a vet, actions speak louder than words. But if you still want to say something, just welcome us home.

Christian Bauman is the author of the novels The Ice Beneath You, Voodoo Lounge, and In Hoboken. He served with the US Army Waterborne in Somalia and Haiti.