As loathe as I am to enter commercial shops other than grocery,

for so-called used bookstores (which these days may not qualify

in the commercial category). I recently paid an overdue call

to my favorite bookseller Vincent McCaffrey at the new location

Victor Hugo Bookstore. Since Vince was still dealing with

old business (like cleaning out the old location) and thus

unavailable, I was unable to purloin my usual few bits of

a year or two. Blue the cat seems to be adapting to the new

digs, and even in its nascent state AVH has a good feel and

smell. This jaunt reminded me that Jody Watson's House of

had closed its doors last month. And so to quell my burgeoning

gloominess, I headed over to the Bryn Mawr Bookstore on Huron

Avenue in Cambridge for their bi-annual half price sale. (My

Okay, occasionally I harbor ungenerous thoughts such as "Other

people's ignorance is my good fortune" when I find treasures

at Bryn Mawr. To find a copy of Michael Malone's Foolscap

(which I have read) or a British edition of Roth's Portnoy's

Complaint (which I haven't read) or a first edition of

Jamaica Kincaid's Annie John and on and on, all for

very low in the single digits prices, is something I believe

Jews call a mitzvah. It also strikes me as peculiar

that hardcover books can lose their dollar value so quickly.

Most of this has, I am sure, to do with what I call the Crush

Apparently it has become the rule in the businesses to do

with books, music and movies (less so with movies, given the

large costs of production) that lots of 'product' is pumped

are then arrayed to market and publicize that product. This

is very much the blockbuster mentality that is responsible

for a decline in the quantity of quality movies. Thankfully,

since the absolute formula for 'hit' books and records (and

even movies) remains elusive, some wonderful literature and

music and film makes it to the marketplace. And sometimes,

One of the bad effects of this huge outpouring of cultural

critics or reviewers or commentators (sometimes known as the

cultural arbiter establishment) are caught up in this onslaught.

Thus a disproportionate, I think, amount of attention is paid

short life span. Personally, when it comes to books and literature

I do not believe everything new is news or that everything

not new is not news.

sovereign nation just north of Buffalo where writers like

Alistair McCleod and Wayne Johnston live). Recently in his

Good Reports he was bemoaning something or other—I was

confused by what the point was:

While I've had fun taking shots at Salon's book coverage…I've

It's unfortunate they didn't better understand the nature

of the Internet beast.

But the loss of Salon.com is only part of what might

be a trend. Also announced this week was the demise of Central

Booking.com, a busy, good-looking book site that focused on

new and under-appreciated American writing. Do these latest

I'm sad to see Salon and Central Booking go. But a high

turnover rate is business as usual on the Internet. Whatever

is lost, more good things are on the way.

I will be mildly distraught at Salon's last hurrah.

But I am much more encouraged by the burgeoning of intelligent

life on the weblog planet especially where literature is concerned.

Michael Orthofer and Elizabeth Morier (with a little help

from their friends) do an admirable job of carrying the flag

for writers of all linguistic persuasions. And their attention

goes beyond the news of Garcia Marquez' grand success with

his (so far only in Spanish) memoirs or WG Sebald's posthumous

publications or a momentary nod to the latest obscure Nobel

Laureate. Such is their dedication that their most recent

(that is the prevalent language of southern Indian Kerala)

novel The Legends of Khasak.

in the Sunday Boston Globe a couple of times a month

has for years marked out a broader literary horizon for her

has a Recently Under Appreciated and a Blast from The Past

section where he solicits nominations from readers. The

that has recently inaugurated an Unsung Heroes series:

As a sort of apology for the general lack of posting

going on lately, our plan for the next two weeks is to give

you a list of ten authors we find to be tremendously underrated.

Not necessarily from a critical standpoint, but in terms of

sales or in-print status. And don't get us wrong, we're not

division, talent-wise, but they've all got something that

makes them worth reading. So the idea is we'll post one a

day (which gives the illusion that TMFTML is being updated

daily over the coming fortnight), with a brief description

and some suggested titles. Because a number of our candidates

are, unfortunately, out of print, we suggest you check with

your local library. Or, if you're really interested, Abebooks,

which we've found to be reliable, comprehensive, and reasonable.

Katherine's papa). And to move this trend more squarely into

the mainstream (though made simple by among others the admirable

work of the Library of America [that's despite the trashing

the LOA was given for their publication of Theodore Dreiser's

An American Tragedy]) Jonathan Yardley at the Washington

in which The Post's book critic reconsiders notable

and/or neglected books from the past."

So from where I sit, at my monitor, it is all good… 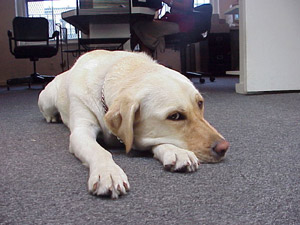