to a one volume English translation of Wistawa

I am old fashioned and think that reading books is the

most glorious pastime that humankind has yet devised. Homo

them human life would pass in unimaginable monotony and, possibly,

dispersion and defeat. But these are group activities, above

which drifts a more or less perceptible whiff of collective

gymnastics. Homo Ludens with a book is free. At least as free

as he’s capable of being. He himself makes up the rules

of the game, which are subject only to his curiosity. He’s

permitted to read intelligent books, from which he will benefit,

as well as stupid ones, from which he may also learn something.

He can stop before finishing one book, if he wishes, while

beginning. He may laugh in the wrong places or stop short

at words that he’ll keep for a lifetime. And finally,

he’s free—and no other hobby can promise this—to

eavesdrop on Montaigne’s arguments or take a quick dip

I reprise it here, in part, because I am reminding myself

that—in what I view as shadowy times getting shadowier—there

is something to be done against the shrieking din of this

impending "inevitable" war whose prosecution by

a group of cynical and arrogant men is additional evidence

of the oligarchic governance that is in place this fragile

Winter for me is decidedly a season of discontent. That others

is yet another cause for pursuing the issue of human quintessence.

But not today. (As you might guess, large sections of my memoir

Delayed Satisfactions are devoted to this compelling

subject.) The allure of skiing and ice fishing and woolens

(even cashmere) and ruddy cheeks and whatever else are signs

of the bounty of this quadrant of the year, escapes me. And

beyond that, as a resident of New England, I still cannot

understand how my fellows seem to go into either catatonia

or some hardware-store spending spree at the mere whispered

mention of a snowstorm. That is, if anything were ever whispered

inquiry and curiosity or whatever pack of instincts and drives

keep them surrounded by and preoccupied companions of a textual

gender. Not so for me. Though I am not sure how my time is

accounted for, it seems that I actually do more reading in

the Spring and Summer (perhaps the longer days, more light…).

In any case, I have been thinking about my literary diet

for the first two months of the year. Exaggerating to make

a point, if I didn't read another (good) book for the rest

of the year, I would still feel like I had done pretty well

already. I have only read sixteen books (perusing the latest

Magazine, which contains the clever idea of focusing

on readers, and they list one reader who claims to read thirteen

books a week.) Almost all have been challenging, instructive,

and in some instances, moving. Best of all, I feel as if I

am avoiding various doses of anxiety and revulsion that I

felt victimized by when I watched television and the insidious

and idiotic information it transmits.

(a novel based on a character named Rudolph Nureyev), Brian

Hall's I Should Be Pleased To Be in Your Company

about a 1970 commune) and Will Self's Dorian (a self-described

imitation of Oscar Wilde's The Picture of Dorian Gray)

are all very different books that have in common (for me)

the connection to some purported accepted reality or real

person(s). In Self's book, that reality is certain social

well-crafted stories, these writings spurred me to thinking

about the fiction/non-fiction fault line. The results of that

thinking remain mute and inchoate at the moment perhaps ready

to burst out in some Tourette's-like verbal spasm at some

Under the Skin, and Michael Thomas' Hanover Place

were all fast-paced narratives that categorizers tend to place

in the genre-fiction niche. Despite the disparaging words

that one author I talked with recently had for so-called genre,

I found quite a lot to recommend these books. Maneater

is funny in that sidereal way that Elmore Leonard amuses.

It's about Hollywood, which has its own built-in amusements

and which, again, Leonard made good use of in Get Shorty.

and crusades for some rational gun control as he patrols the

gang turf of the District of Columbia. Baker's Under The

Skin takes us back to the Texas-Mexican Border around

the period when Pancho Villa was whooping it up and being

chase by a gringo army and others. Part of the story line

did remind me of Jim Harrison's novella Revenge—which

is not a bad thing.

Three books were emphatically deep forays into the interior.

A Memory of War tells of the disintegration of the

life of a middle-aged psychotherapist. Did his mother bear

an illegitimate half brother? Is his wife having an affair

with his best friend? What happened to the young patient he

was treating who became his lover and then disappeared? All

questions in the service of story that riveting. First novelist

woman in The Good Patient who seems bent on various

methods of self-abuse and destruction for over half her life.

Her husband is frantically concerned and her latest therapist

in her life. And Sherwin Nuland's Lost In America

is a wrenching and harrowing account of growing up with a

disturbed and disconnected immigrant father in America in

himself in a deep depression that required his hospitalization

for a few years that led to him almost being lobotomized.

a model of emotional honesty.

impulse. That is, besides reading the Woodward hagiographic

Bush book, I have avoided the growing bibliography on the

Bush Presidency. I have read no books on Islamic fundamentalism

or who took my cheese or Chicken Soup for Dummies. The reading

goes on in the intuitive and scatter-shot way it always has.

That probably explains why it is still fun after all this

A few years ago, Lewis Lapham closed one of his Harper's

essays with the following quote from T.H. White's Once

and Future King. It is a thought that grabbed me then

and it still resonates for me today and I think, everyday:

The best thing for being sad...is to learn

something. That is the only thing that never fails. You may

grow old and trembling in your anatomies, you may lie awake

listening to the disorder in your veins, you may miss your

only love, you may see the world about you devastated by evil

lunatics, or know your honor trampled in the sewers of baser

minds. There is only one thing for it then—to learn.

Learn why the world wags and what wags it. That is the only

thing which the mind can never exhaust, never alienate, never

be tortured by, never fear or distrust, and never dream of 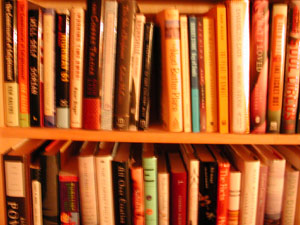