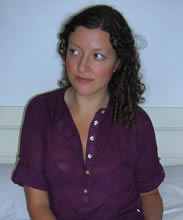 Francesca Gavin contends that the works of today’s street artists are meant to jolt those passing by into an active reality, to turn a passive experience into a conversation, a situation, a happening in which thought is not simply a possible inevitability but a demand of the artist. One’s response could be a quick laugh, or a thoughtful reconsideration of a pre-existing belief. Whatever the reaction, these artists are using myriad means to garner it, and their work is captured in Gavin’s book, Street Renegades: New Underground Art.

It was Guy Debord who demanded that spectators drugged by images be woken up through radical action. Gavin’s book documents thirty such artists, including CutUp, the London-based collective of artists whose works re-imagine the city’s visual landscape through manipulation of billboards, and Leopold Kessler, whose guerrilla-style public interventions seek the cracks in highly regulated public spaces.

Gavin took the time to answer 12 questions for Identity Theory. 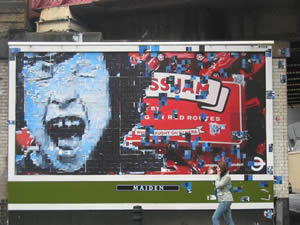 What drove your interest in creating a book about this form of underground art?

I've written about left-field art for about a decade for magazines and online outlets. My initial interest in street work was because of my sister. She was fascinated with photographing crumbling walls and peeling paint in the back streets of London. We would wander the streets photographing disintegration, with me acting as a kind of photo-assistant-cum-bag-holder. I'd seen the first posters, stencils and stickers go up at the time in the same kinds of places. At the same time, there was a massive increase of graffiti pieces along train lines and in hall of fames. I ended up going to a lot of the early gallery shows when things began to cross over.

Flashing forward, when the book project came up I was really adamant that if I was going to write something about underground and street art, I wanted to look at the more recent work, where mediums were getting stranger and things were more complex and sculptural. It veered much more towards 'fine' art in approach and concept, and I found those blurry boundaries much more interesting than the late '90s graphic-design-influenced work that had dominated so many books before mine. I found a lot of two-dimensional work a bit dated. 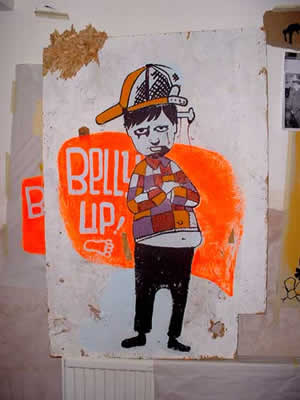 What are some of the materials these artists use?

There're so many: Chalk, street signs, cello tape, rubbish bags, balloons, even TV ads. Even when people are using more traditional materials, like pens, paint or posters it can still be very fresh if the approach is right.

Artists, like CutUp, originally used billboard posters as the material itself, ripping them down, cutting them up into mosaic-like, pixel-like squares. I love that whole idea of using the detritus of the street to create the work itself. 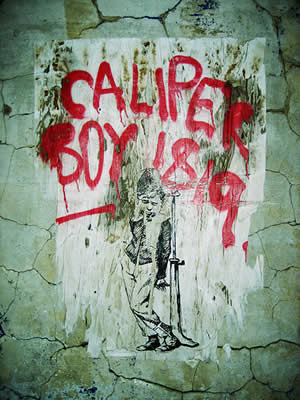 What is the most moving street art you've seen? Most subversive?

Samuel Francois' interventions in the countryside--painting stripes in alcoves of trees or abandoned buildings in woods. These had such a different resonance to them, upsetting the whole idea of 'urban' art.

Mark Jenkins’ faceless human-scale figures also were very provoking, with their heads sinking into concrete walls, or looming out of dark-hooded tops. I liked the way the sculptures made me question reality; they almost made you want to put your hand into their void. That's a very physical and fascinating sensation.

I think Leopold Kessler's street work is probably the most subversive--and the most subtle. There's a piece in my book where he had cut the 'O' out of a police station sign and made the space into his own storage box. The simplicity and risk of that was brilliant. 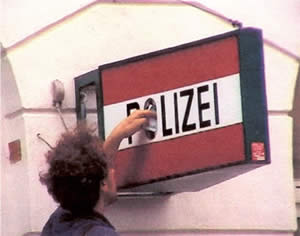 In tandem with that, who are some of your favorite underground artists and why?

My personal favorites? I love CutUp for their fascination with Situationism and how they continuously push their approach to using the street as an inspiration. I can’t get enough of the Polish artist Truth, who creates these modernist, Malevich-like sculptures and sticks them on the sides of buildings. They're simply beautiful. In Barcelona, I recently saw some work that consisted of these splashes of color from paintballs around the city. I found the abstract nature of that brilliant. 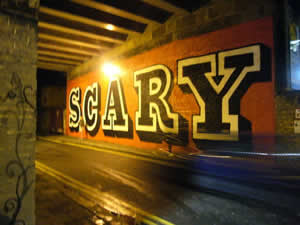 You say in the book: "The street is the only place where we know something is real." What do you mean by that?

I think we spend a lot of our lives living a kind of virtual reality. I'm really thinking about a Western, capitalist, computer-based society. We float between TV screens to computer screens and back. You can live a day without any awareness of other people. What we know of reality is often mediated through largely screen-based media. What we know of the world is largely filtered through the media, technology and the political ideology of whatever society you're living in. I'd argue that this is not reality in its true sense. It’s a kind of plastic reality.

I think the streets, where you actually see, smell and touch real people moving through real space in a real community, are the only places where we actually can experience some kind of actual truth. I think that's really important. If a person is standing in front of you talking to you, or in your personal space, then you are relating to them in a very different way. 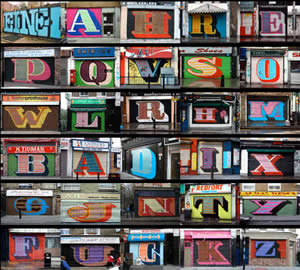 How do you think street art affects how people experience city life?

When it’s good, street art, like all art, can affect people on a deep level. It’s all about what speaks to you. I think there's lots of room to question the ownership or arrangement of public space and that's where street art excels. Sometimes this may just mean a little chuckle on the way to work; other times it could be something that gets you thinking about who actually owns that blank wall. I'm also really interested in how some artists, take Eine or Caliper Boy, and how they transform the city into a kind of narrative, some kind of giant sketchbook. 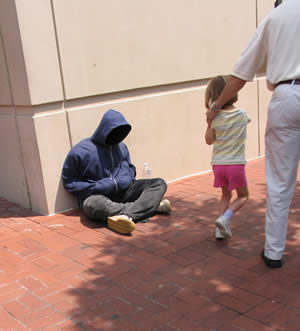 How do you think the possibilities presented by the Internet have affected the power and reach of street art? Are we seeing street artists working collectively at all, drawing inspiration from one another?

Well, the Internet was invaluable when I researching my book and has had an enormous impact on street artists. You see the work so quickly, people's approaches bounce back far more quickly; however, I still think that the artists creating the best work are great because they aren't necessarily working collectively but have very strong personal visions and approaches to creating art. I think there's more admiration and dissemination rather than inspiration between artists. 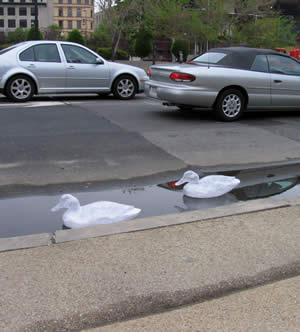 You say in the book: "In a world where everyone is transformed into a passive consumer, creation can be a potentially revolutionary alternative." How does this form of art shake passersby from passivity?

Ah, my love of Debord has come to bite me on the bum.

I was very much referring to Debord's idea of the spectacle--as far as my limited understanding of that is. I was interested in how he questioned the process of being active rather than passively accepting and observing. I was interested that art, because it is something actively made, questions the normal consumption of existence or politics, or reality itself. Anyone who makes something is, by definition, challenging the idea of passive consumption.

I also think looking at art on the street can be a different experience, rather than looking at a painting in a gallery where it’s expected. 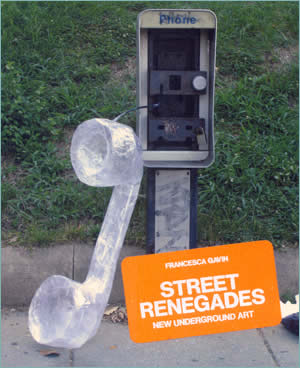 What do you think of corporations attempting to reach youth culture by employing the use of graffiti and other street art techniques in their advertising campaigns?

I think a lot of the work around the turn of the twentieth century exploited and played with the methods and approaches of branding, graphics and logos, initially as a criticism of globalization, or the ubiquity of advertising, but perhaps it was too easy for advertisers to happily exploit their methods and approaches. In those days before Banksy made it big, working with advertisers was often the only way for a lot of these artists to make anything close to a living. No one did it because they wanted to. And, yes, I do think it damages the content of the work and the aim of the artist whether they like it or not.

I also think that it’s often a sign of a desperate advertising industry desperately trying to reach a demographic that is slipping through their fingers. Saying that, I think that wave of guerrilla advertising is fading away. 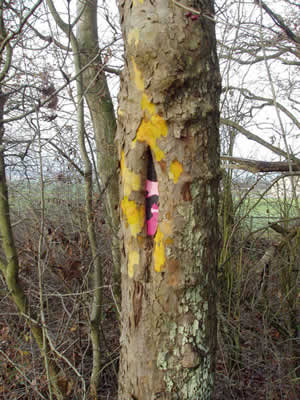 Who is the "Decapitator"?

A London-based street artist who amends advertisement so they look like the characters within them have had their heads sliced off and you're left with a bloody stump. I love the violence of it, like seeing the city through the eyes of a tongue-in-cheek Travis Bickle. 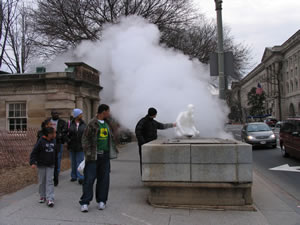 Where does one draw the line between art and vandalism? Is there such a thing?

All art is vandalism, I suppose. It’s a question that has haunted graffiti for almost forty years and is a bit defunct in my opinion. Everyone's just scrawling with their crayons on their living room walls like they did when they were toddlers. I believe in respecting people's personal space, but I see nothing wrong with creating work on spaces owned by giant corporations, or empty ugly concrete walls. I'd rather have someone's expression, even if it was rubbish, rather than another Tesco or McDonalds sign.

Where else can our readers find your thoughts on art online?

I write art blogs for The Guardian online. There are lots of my old reviews and interviews for the recently, very sadly defunct BBC collective website. I'm the Visual Arts Editor at Dazed & Confused and contribute to www.dazeddigital.com. I've also edited a couple of issues of Into the Storm in the past.