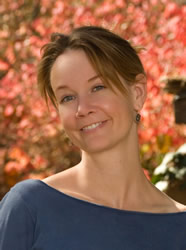 Laura Moriarty's writing has been said to "resonate like an emotional tuning fork." A novelist intrigued by the varied and complex relationships between mothers and daughters, she crafts characters that are both authentic and accessible, caught in difficult situations that force them to come to terms with themselves.

Her latest work, The Rest of Her Life, explores the emotional aftermath that follows for a family and a community when a young woman unwittingly causes a tragic death. The accident that happens on the first few pages of the book opens a story that examines how mothers and daughters, even with the best of intentions, involuntarily hurt one another and those around them.

What inspired you to write The Rest of Her Life?

There have been several accidents like this--accidents where someone sober and normally careful makes a mistake while driving and kills another person--in my community in the last few years, and reading about them in the paper got me thinking about how it's something that could happen to anyone who drives. I wanted to consider the psychology of someone who feels tremendous guilt for something she never meant to do.

How was writing a second novel different from writing a debut novel?

It was much easier the second time around, partly because I'd been through the highs and lows and planning stages of writing a novel before, and I knew what to expect; it was also easier because I didn't have to have a day job.

Both novels explore mother-daughter relationships. What about this relationship intrigues you?

I think the mother-daughter relationship is endlessly varied and complex, so I'll never run out of subject matter. Also, it allows me to write about women at different stages of life. I'm actually pretty interested in people in general, so I may expand my horizons in the future. There's a parallel father-son dynamic going on in The Rest of Her Life.

You live in Lawrence, Kansas, where both novels take place. How does your environment inform your work?

Both of the novels are set in Kansas--it's where I've lived the longest, and I really feel connected to the landscape and the culture. But neither of the novels is set in Lawrence. The Center of Everything and The Rest of Her Life are both set in fictitious towns that are much smaller than Lawrence. Lawrence has around eighty thousand people. It's a college town, and it's pretty close to K.C. But I think small towns lend themselves to drama: there's more of a claustrophobic atmosphere and also the likely possibility that you will bump into--or have to learn to live with--an enemy. The protagonist in each novel has a different relationship with her town--I think Evelyn [in The Center of Everything] has to learn to see beyond Kerrville, and I think Leigh [in The Rest of Her Life] has to learn to let herself truly be part of the community. I really love where I live, Lawrence, and I'd like to set a novel here someday, but I'd really want to get it right--it's such a quirky, lovely town, and it's ended up becoming a very important place to me.

The Rest of Her Life centers around the aftermath of a car accident that takes place on the first page of the book and directly involves Kara, the narrator Leigh's daughter. Why choose to narrate the novel from Leigh's perspective instead of Kara's?

I didn't want the novel to be just a surface-level conflict, a story about a nice, normal kid who accidentally hits someone with a car and has to reconcile with the guilt. I started researching accidents like this, and the thing I kept noticing the drivers saying was, "I never even saw her," or "I never saw the kid." The drivers seemed to really dwell on this lack of seeing, and when I thought about it, I could understand why. It would be hard enough to accept guilt for something terrible you had no intention of doing, and it would be even harder if you had no visual memory of actually doing it. It would be like accepting guilt for something you'd done during a blackout. So the whole issue of blind spots got me thinking about how people also have blind spots when it comes to themselves and their relationships. I wanted to bring in a character who has good intentions but doesn't really see or understand the hurt she's causing for other people. That character turned into the driver's mother, Leigh.

For most of the novel, Leigh comes across as self-centered, making her unsympathetic. What were your reasons for making her this way?

That's sort of a tough question for me, because I don't see Leigh as self-centered, and she has my complete sympathy. I agree she's terribly insecure, which is the result of her own childhood. But she truly cares about other people, especially the underdogs of the world. She's an award-winning teacher, though she prefers working with disabled students over the academic stars, and I think she's actually a very caring mother, though she's much more comfortable with her awkward, friendless son than she is with her confident, popular daughter. I actually see Leigh as pretty heroic, even at the beginning of the novel. She's had a bad start in life, but she works hard to put herself through school, and she marries a guy she knows will be a good father, all because she wants her children to have it easier than she did. And indeed, her children reap the benefits of all her planning. The trouble is, her daughter, who grew up with a doting father in a stable, middle-class home, has confidence and choices her mother only dreamed of, and Leigh, despite her best intentions, is a little resentful, or at least a little intimidated by this. I don't think that makes her unlikeable. I think that makes her human and interesting, and she has my complete respect because unlike many people with blind spots--and I think most people have them--she tries to take a hard, honest look at herself to change herself and her relationship with her daughter.

Well, I think every relationship is different, so I can't make any broad statements about one kind versus the other. But I wanted Leigh to have a sibling, someone who had gone through exactly what she'd gone through, who nonetheless turned out very differently. I think at the beginning of the book, Leigh--and the reader, perhaps--would see Leigh as the successful sibling, the one who made it. But as the novel goes on, Leigh sees that that although her sister is damaged in some ways that Leigh isn't, she is also successful in ways that Leigh isn't. The book is very much about people's strengths and weaknesses, and people learning to see each other, and themselves, more clearly.

The thread of religion runs throughout the novel, from local church leaders who want Leigh to revise the book selections she has made for her high school English class, to Leigh's sister, Pam, whose religious experiences inspire Kara to make a crucial decision at the end of the novel. Why did you choose to have religion play a role in both Kara's and Leigh's growth as characters?

The Rest of Her Life is very much about community, and different people being forced to live together, and make important decisions together, and one of the most difficult but important decisions communities have to make is what kids read in school. As a writer in Kansas, I'm often frustrated by the Religious Right’s attempt to challenge or ban books that I consider important and beautiful--a town close to mine just had a big fight over Of Mice and Men. I got to meet a lot of Kansas librarians on my first book tour, and I was surprised to hear how much of their jobs are devoted to dealing with censorship requests. So I'm sympathetic with Leigh's fight with the mother who wants to alter the junior high reading list. But some of the people I respect most--friends and famous people alike--are devout Christians, and I completely admire the way they live their lives and treat other people and fight against injustice, etc. I met a lot of Christians like that when I was in social work, a lot of selfless and brave people who have really devoted their lives to following Christ's teachings. And I've met a lot of people like Pam, who gain solace and strength from religion and who aren't so concerned with banning books or stopping gay people from getting married as they are with just trying to be understanding and forgiving and humble. Personally, I'm agnostic, but I admire people like Pam--and the church that takes her in--a lot.

Kara's best friend, Willow, decides to get breast implants. Why include this decision on the part of a minor character?

Well, I've noticed the phenomenon in recent years. Girls are getting them for graduation, even here in the Midwest. I thought it would be a good way to bring up one of Leigh's major hang-ups: deep down, she thinks life should be fair, and hardships make you better, and if you get too much of everything without struggle, there's something wrong. It's pretty Midwestern thinking. Her friend Eva really challenges Leigh on this when they're discussing Willow's implants. Leigh finally admits that she's not really so concerned about Willow's health as the idea that this string bean of a girl is getting these huge breasts. Eva calls Leigh "the happiness police," and I think she's on to something. I'm not getting on a soapbox for plastic surgery, and I think it's important that we teach young women to value their minds and hearts. But I also think some of the scorn for implants and such doesn't match the way our culture values youth and beauty. It's like saying to girls, "Yes, our culture loves this, but if you weren't born with it, forget it! You have to be born with it for it to count." It's like old money or something. And I think Eva has a point. Willow has earned good grades, and she's a nice person, so if she wants the implants and they make her happy, what's the big deal? Readers may not agree with me on this one, of course, but I like that I have two very opinionated characters fighting with each other about it.

What do you appreciate most about working with your editor?

I respect her judgment, and she stops me from doing really stupid things sometimes. I like her as a person, and I think she really cares about my books and also about literature in general. She's very well-read. She's also, like me, the mother of a three-year-old, so I can get advice from her on parenting craziness, too.

Friends and family must ask you for book recommendations all the time. What was the last book you offered up as a must-read?

The All-True Travels and Adventures of Lidie Newton by Jane Smiley. I also really enjoyed The World Below by Sue Miller. This may surprise people, but my favorite book of all-time is The Corrections by Jonathan Franzen. I don't write the way he does, but that's just because I can't.