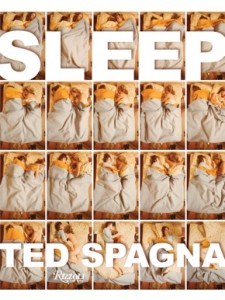 "Ted Spagna's photographs have done more than any other medium to make sleep science visible and, hence, directly understandable to the general public." -Dr. Allan Hobson

"Like Eadweard Muybridge's pioneering 19th-century studies of animal locomotion and Harold Edgerton's stroboscopic feats with milk drops and flying bullets, Spagna's 'God's-eye views,' as he calls them, succeed as both art and science." -People, Feb. 6 1989

Documentary photographer Ted Spagna began taking pictures of himself sleeping in 1975 using a time-lapse camera mounted over his bed. For the following fourteen years leading up to his untimely death in 1989, he continued to expand his sleep project, capturing images of individuals and groups of all ages in different stages of slumber. Spagna's sleep studies were featured on various TV shows and major print media and earned a bounty of photography awards.

SLEEP (Rizzoli New York, Sept. 2013) is a 144-page collection of Spagna's photographs from this period, made possible by his nephew Ron Eldridge and god-daughter Delia Bonfilio through The Ted Spagna Project.