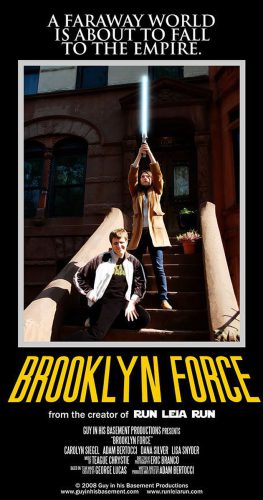 So there’s this obscure series of sci-fi films with a bit of a cult following. It’s about a small faction of religious types who rise up against all odds to defeat an evil empire. It’s a six part-series. The first three are kind of terrible with really stiff acting, terrible dialogue, some irritating characters and too much of a focus on this silly little made-up religion. But then they get it together for the next three. The writing gets way better, the bad guy acts more badass, the special effects are less green-screen heavy and the actors are much more natural. One actor, who plays a smuggler initially caught up in the war by accident, is even pretty sexy. I heard he adlibbed several of his cooler lines. Anyway, you probably haven’t heard of these movies but they apparently heavily influenced a few filmmakers out there. People like Kevin Smith, Edgar Wright and Adam Bertocci.

Now Smith and Wright understood the obscurity of these films and therefore used a light touch when referencing them in their stories. But Bertocci, the writer, director, editor and star of “Brooklyn Force,” took it all the way. What’s the point of a light reference when you can make nearly all your dialogue into a paraphrase of “Star Wars”? I theorize that, when coming up with the idea for the film, his thought process was thus:

It could be like those quote-athons you have with your buddies, only recorded on film. You could make other people watch it and they would be super impressed with your powers of recollection. Better still, you could use all those light sabers you have laying around your studio apartment and show off your After Effects skills by making them look like real, working light sabers! All those “Star Wars” sound effects you’ve been storing on your hard drive could really come in handy here too. Now all we need is a plot…it doesn’t have to be a very strong plot. Just some good vs. evil story that will make it seem like the references are completely fitting and not just an excuse to show off how much you love “Star Wars.” Something about the gentrification of Williamsburg and an indie record store to give it some hipster cred. Also, you can ask that cute girl from work to be in it. Didn’t she say she was an actress? Maybe it will give you a chance to get to know her better.

I know there are things called “fan films” and that this probably falls into that category. But I guess I don’t see the point in the fan film. Look, I love "Star Wars" like every other cinephile born in the late seventies. But when I have a jones for it, I’ll watch the original movies. Not some nerd’s love letter to them. “Brooklyn Force” is a tedious little movie, even at a mere 13 minutes. Or maybe I’m just bitter because Bertocci’s film erroneously claims, “Episode 3 is underrated.”