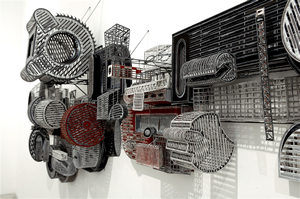 Jane South's creative impulse comes from a seemingly unlikely source: bike rides around New York City. The shifting perspective that results from moving toward and away from structural objects inspires her exploration of the human relationship with architecture. As her media, South chooses materials fundamental to art and to architecture--paper, balsa wood, acrylic and ink. With these basic elements, she creates three-dimensional sculptures that reference the industrial forms she is exposed to almost every day. (Incidentally, her studio window looks out on the Brooklyn Bridge.) What does South seek to capture in her whimsical, almost cartoonish constructions? With dozens of individual elements, folds, and marks, the meticulously constructed works are both sturdy and flimsy, modern yet archaic, encapsulating what South calls "the fluidity of our architectural experience."

Several things--I have a show opening in Houston at the end of February, so I am finishing up some large pieces for that. I'm also working on an edition project, which is a collaboration with poet Miles Champion for an annual arts and culture magazine called The Sienese Shredder, and I am developing a large-scale piece, which will be installed somewhere in DUMBO in 2009.

Most of my work draws on the experience of riding my bicycle around the city. When I first moved to Red Hook, Brooklyn, I was living amongst the remnants of 19th-century industrial architecture--wharves, cranes and windowless warehouses--and the burgeoning technological infrastructures of the twenty-first--giant satellite dishes, cable terminals...things that I don't know the names of...these structures were right on the doorstep so I encountered them in all their structural mass and enormity, but by the time I was cycling over the Brooklyn Bridge, they appeared on the horizon as tiny and delicate linear structures. It is this constant shifting of perspective and scale that constitutes our actual phenomenological experience of architecture and the city and that I aim to get across, the moving through and around structures, the fluidity of our architectural experience. 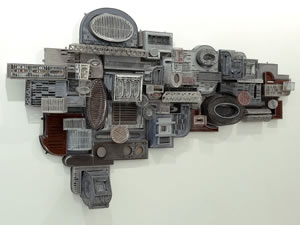 Your medium of choice is paper. What drives your interest in using this material?

I use ink and paper for my work because I see it as being fundamental to art-making and like to play with the idea that I'm using something that has been used throughout art history as a starting point as my final one. Also it's the idea of contrariness, making large-scale, three-dimensional works out of a material that is flat and referencing industrial forms in a material that is delicate and not at all urban. Of course there is also the allusion to the vocabulary that architects use when they describe three-dimensional forms in two dimensions--for which paper is the vehicle.

Curator Sarina Basta of SculptureCenter said, "There is definitely a trend toward paper right now, and it's partly a reaction against the higher tech--against meta, multimedia installations. It's a kind of art povera thing." What is your reaction to her statement?

Sort of agree--I like the directness of the material in that I can make all my work myself and for me it gets to the essence of an idea that interests me greatly about art--the question of the "moment of transformation": at what point do you take what exists in the world in one state and affect it so that it transcends this state and becomes something that can be called art? I feel that to strip down my vocabulary as an artist as pertains to material and to work directly with this material with no complicated/expensive machinery enables me to pay attention to this question and gives the viewer access to it.

What did you do before becoming a full-time artist?

Many, many different jobs from the usual waitressing and bartending to mixing concrete on construction sites, drawing architectural renderings and designing sets for the theater. 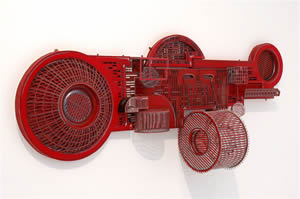 You grew up in Manchester, England and currently live in New York. How has living in these cities informed your work?

Very much. In addition to answers to question one, I would say that I am also influenced by the way I have seen my neighborhoods evolve (for better and worse) over the past few years. New York City in particular is de- and re-constructed so much that it exists in a constant state of undress, exposing its often dilapidated and/or shoddily/cheaply constructed layers--to me it's a reminder of the illusory and temporary nature of our sense of place.

Your work calls to mind machines and buildings. Why choose to create such structures? What are you attempting to convey to the viewer?

I'm interested in the structure of things and so forms that are integral to this structure interest me--for this reason, for example, I am more drawn to the Manhattan than the Brooklyn Bridge--it's all exposed, it is what it is with no disguise. Machinery, likewise, has the form it has because of how it needs to operate--it's no nonsense stuff and there's a beauty in that.

The level of detail in the work is staggering. How important do you think craftsmanship is to artistic creation?

I don't like the word craftsmanship as it implies a preciousness--for me the making cannot be separated from the reason for making, the conceptual underpinning and--as outlined in question four--my process demands attention to detail and a certain understanding of my chosen material in order to communicate this. Different art demands different skills, or no skills at all--it entirely depends on what one is trying to say. 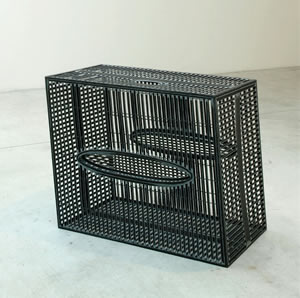 What can you say about your work that might not be evident to the viewer?

Someone once told me that they enjoyed the "noisy silence" of the work.

If you could have any piece of artwork in your personal collection, what would it be and why?

Someone is writing a book about your role in the art world. What would be the title and subtitle of the book?