(no numerical threshold required) probably have a few books

on their shelves or in the piles by their bed—or wherever,

that stare out forlornly, unrequited, waiting to be picked

up, waiting to be read. How does this happen? Who can say,

In talking to Richard Price recently, he mentioned that he

had read Scott Spencer's newest novel, A Ship Made of

Paper. This triggered my recollection that I have three

or four of Spencer's novels. And have read exactly none. Respect

for Price's judgment and curiosity and a quickly skimmed review

in The New Yorker had me emailing the Ecco Press

publicist the next day.

And when Tommy, the UPS driver, delivered my requested copy

I burned right through it. Scott Spencer's tale of an adulterous

affair between a white lawyer, Daniel Emerson, and a black

well crafted. In this novel's small New York town there are,

of course, additionally the castoff partners of the adulterers:

who is professionally obsessed with the in-progress O.J. Simpson

banker who is Iris' husband and father of young Nelson. Also

there are Kate's young daughter and a dog and old friends

and the parents of the main actors and your usual assortment

of small-town weirdos—generally a full and entertaining

supporting cast. Not to mention a few plot twists and turns

which bring this tale to a boil and then just in time, to

a simmer before the pot overflows.

I was content to view Spencer's novel with a simple appreciation.

And then I chanced to look at Laura

and thoughtful writer, even if she did write a dumbed down

article for the New York Times Magazine, "This

''Meta'' is a liminal term these days; it's creeping

more and more into everyday conversations, even if it's not

nearly as widespread as, say, ''irony.'' Some people talk

about meta all the time. Recently a friend and I were e-mailing

back and forth, trying to sort out our plans to catch an evening

movie, when we started to discuss how we were going to make

the decision itself -- should we stick to e-mail or switch

to instant messaging or the phone? ''This is getting too meta,''

he wrote. ''Just call me.'' Other people, including another

movie-steeped friend, may not recognize the term ''meta,''

but they know exactly what it is all the same; on the basis

of a quick definition, my friend could instantly list a half-dozen

good examples: ''Oh, I get it. Beavis and Butthead

was a music-video show about watching music videos, and that

teen film Not Another Teen Movie had a character

whose only name was the Token Black Guy.''

But I digress. Ms Miller's view of A Ship Made of Paper

novels) exegesis and seemed to be sensitive to the nuances

of Spencer's effort. And though I disagree with her view of

the way Daniel and Iris experience their incendiary connection,

in the following way:

…When Daniel rhapsodizes about entering ''a higher

plane of feeling, a higher plane of devotion and a higher

plane of pleasure,'' he unconsciously echoes the medieval

chivalric romances that invented this vision of sublime love.

Yet in those stories, desire's power comes not just from society's

opposition to the lovers but also from the lovers' rejection

of society. The intensity of Lancelot and Guinevere's love

was fueled in part by hatred: of mundane order and its obligations,

of life's disappointing lack of opportunities for transcendence,

of the world itself. Without acknowledging this darkness,

the lovers of 'A Ship Made of Paper' can't achieve

true radiance. When Kate wonders if ''all those emotions we

call love turn out to be what's really worst in us, what if

it's all the firings of the foulest, most primitive part of

the back brain, what if it's just as savage and selfish as

rage or greed or lust,'' she's not entirely wrong. But who

listens to her, anyway?

Actually, Daniel listens to Kate. And after the she delivers

the soliloquy below, he decides—he considers his response—it

was better not to respond.

Love has become some insane substitute for religion.

I think that's what's happened. And in this country it's pounded

in on us at all times, every radio station, every TV station,

all the magazines, all the ads, everywhere, it's like living

in a theocracy, it's like living in Jordan and people are

shouting out lines from the Koran from the top of every mosque.

Love, love, love, but what they are really saying is: Take

what you want and the hell with everything else. We have even

changed the Bible to go along with this new religion. When

I was a kid, people used to read Paul's letter to the Corinthians

as being about charity—it used to be faith, hope and

now they've changed the translation and it's not charity at

all, it's love. Big old encompassing love, spreading all over

gaze into its cracked heart and you see what you want to see.

It's really scary. It feels like the whole culture has gone

It seems to me that, in this story, is one of Daniel better 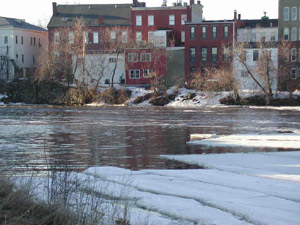 Spring Comes to the Squamsit River