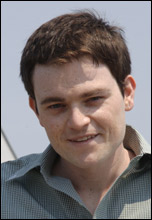 Scott Snyder's debut story collection, Voodoo Heart (Dial, June 2006), is the one book I've read this year that I could tear through about fifty more times and enjoy it even more on each sitting. It's that good. The set of seven stories has been critically acclaimed by Stephen King, among others, and a recent review by John Glassie in The Believer put it like this: "In his entirely enjoyable and justifiably inventive debut collection, Scott Snyder works in the area of the unlikely, as opposed to that of the utterly impossible, focusing his imagination on what could happen if the axis of the earth were tilted by just a few more fractions of a degree."

The stories in Voodoo Heart involve topics such as: an allegedly brain-damaged country singer with a cult following, a dumpster outside a pawn shop, an old mansion near a secluded women's prison, a man who watches for jumpers at Niagara Falls, and the phrase "Happy Fish, Plus Coin." Three take place in central Florida, where the author once worked as a Disney character.

Scott Snyder currently teaches writing at Columbia and lives on Long Island, where he is working on a novel—sometimes from the backseat of his car.

After you graduated from Brown in '98 you went to Orlando and ended up taking on various jobs at Disney World—roller-skating janitor, Buzz Lightyear character, etc. It just occurred to me that around that same time, I was working a couple of I-4 exits away at Universal Studios, though my experience was likely not as interesting as yours given that I grew up in that bizarre city. What is it that drew you to Orlando of all places? I ask because it's not a typical post-graduate destination, and outside of maybe Jack Kerouac and Zora Neale Hurston (who far predate Disney World), the area has a pretty vacant literary tradition.

You worked at Universal? Now we have to tie our wrists together and knife-fight...I wasn't actually that drawn to Disney at first. I was more interested in working at the newspaper, The Weekly World News—it's all Bigfoot sightings and alien babies, Batboy escaping from his cave...I applied for a job there, but they didn't end up taking me. (They're run by The Enquirer, by the way, and to get into the building you buzz the intercom and say: "Enquiring minds want to know...") When the job at the paper fell through, I decided to try my luck at Disney. I'd always had it in my mind as a back-up, but I really wanted to work at the WWN (I had a subscription through much of college). I did have a sense of wanting to work in Florida, though. There's just something about it. The odd combination of retirees, tourists, angry locals. The theme parks, the pawnshops, the beaches and swamps. It really felt like the end of the country to me, like a gang plank sticking out over the ocean.

To what degree is it important for fiction writers to put themselves in untraditional situations (like roller-skating around a theme park cleaning up trash)? Do you think that the substance of your writing greatly improved by taking a year off from your Ivy League education to hang out in the tourist-filled wasteland of central Florida and work for Mickey Mouse?

That's a good question. I guess I don't think that it's necessarily important for all writers to put themselves in odd contexts. For me, it did a world of good for my writing. I'd lived in the Northeast my whole life. I'd never worked for a big corporation, for minimum wage. I'd never been so out of place before. At the same time, Orlando felt like just the right place to be. Almost like a funhouse image of home. All the things I ended up writing about, those things that are deeply frightening to me—fear of commitment and growing up, fear of losing loved ones, the wonder and terror of falling in love—all of it was constantly being played out all around me in this weird, cartoonish, magnified way at Disney, if that makes sense. Disney is a perfect marriage of the wondrous and nightmarish. Which is what I ended up shooting for in the stories.

You've moved on from your Disney experience to become a writing professor at Columbia. What is the best advice you have given your students from your own experience?

The golden rule in my class is that you can only write about what interests you. Meaning that if what gets you is comedy, you should write comedy, but if what excites you is a political issue, you should write with it in mind, and so on. So the best advice I guess I can give is to really force yourself to be brave and only ever write about the things that excite and/or frighten you the most. Plus, telling students this day after day, it keeps you honest. You can't get on their case if you don't write from the heart yourself when you get home at night.

If you weren't teaching or working in the literary world in any capacity, what would you be doing now?

I'd definitely be working in comic books. I wanted to be a comic book illustrator all the way up until college. I still practice a lot, and my publisher was actually kind enough to let me live out my fantasy in a small way and draw some simple illustrations for the collection—I did those little drawings at the start of each story.

It's a common assertion that the first book from a writer is the most autobiographical. Do you feel as though any of the stories in Voodoo Heart are especially reflective of your own life?

I do feel that they're deeply autobiographical, even though on the surface none of the characters has anything in common with me. They live very different lives than I do. But at the same time their issues are mine, the things they struggle with. I try to place them in contexts that force them to face the things they're most afraid of or attracted to. Sort of like a psychological landscape, I guess.

A few of the narratives in Voodoo Heart relate to flying, and from what I've read, your next book, a novel, deals with early aviation. Where does your interest in this subject come from?

I've always loved aviation, especially early aviation. When I was a little kid, my grandfather used to build model rockets with me. We'd construct them piece by piece, the body, the fins, then paint them. We'd buy those cardboard engine tubes. We launched the rockets in a field near his house. There's still something that gets me about the idea of an object defying the laws of gravity, escaping the earth's pull.

Your website says you're "a big Elvis fan (and not in an ironic way)." Do you agree with the statement from Pulp Fiction that it's impossible to love both Elvis and the Beatles equally?

I do sort of agree with that—I remember that line well. I think that to some degree Elvis fans are more about that singular coolness, you know? The comet. The guy who's entirely his own wild new animal. Beatles fans, I think, are more about the collective product, the collaboration—the music.

Do you listen to Elvis when you write? How big a place does Elvis (and music in general) take up in your life?

I often listen to Elvis when I write. I listen to other things, too, but mostly Elvis. And he does play a big part in my life. It's kind of personal, I guess. I really got into him when I was still a teenager. I was a pretty nerdy kid (in case the comics reference didn't already make that clear) and at some point I just wanted to find something that would be both completely uncool and completely mine. I was trying to discover something for myself then, I think, when I first came across Elvis. But what happened was that I really fell for him. I loved the music. And even more than this, I found great inspiration in his story, especially his early years. When Elvis was a teenager, for example, he had little reason to believe in himself. He was poor, scrawny, covered in acne. And yet he came to school dressed as though he was already a rock star, in pink pants, a gold blazer, his hair swept up in a pompadour, eyes lined with mascara. That confidence, that ballsiness, I found it hugely admirable as a kid (still do). Over time, I got into all the different phases of Elvis's career.

How would you describe your writing practices in terms of the "set and setting" (borrowing a term from psychedelia) in which you do your best writing?

I'm just a big believer in trying to be disciplined about it, really. I don't have a set time, though I'm coming to prefer writing in the early day. I try to always put in my hours is the thing, at least three a day. I sometimes write at home, sometimes at the library. When the weather's nice I like to write in my car, which is an old model. I'm out on Long Island—my wife's in school out here—so I can drive to the shore and park, write in the big back seat.

Which story in Voodoo Heart was the most challenging to write?

The title story was definitely the hardest for me. It took me about five months to write, draft after draft. It's also my favorite in the collection.

Is there a certain form that you feel most comfortable with—short story, novel, novella? Which do you think you will focus on publishing over the course of your career?

I like the short story form a lot, though some of the stories in Voodoo Heart were beginning to lean toward novellas in length. The compression necessary in a story works well for me. I like playing with the claustrophobic, pressure cooker effect. Packing a story with elements that attract and repel each other at once. I just started work on a novel, though. It's about early flight, as you know, and it's also for Dial.

You've been on our newsletter mailing list for a while and seem to be an avid reader of online fiction (as well as a contributor). What's your perception of the Web's place in the literary world, especially as it relates to younger authors like yourself?

I think the Web's been great for creating a broader literary community—granting writers access to readers and each other, providing resources like literary news sites and blogs. It's also opened up a whole new venue for all sorts of writing: not just fiction, poetry and essays, but reviews, profiles, interviews (your interview archive alone is a treasure chest). It's an exciting time to be a young writer. Geeks unite.

What are the best books you've read this year?

I was lucky enough to get a couple books in galley form in the last few months that I really loved. One was Kelly Braffet's Last Seen Leaving (Houghton Mifflin), out in November—a terrific, smart, literary thriller. The other was Karen Russell's upcoming collection, St. Lucy's Home for Girls Raised by Wolves (out in September from Knopf). Startlingly original and imaginative. Both are must reads.

Are there any new authors whose work has flown under the radar that you'd like to recommend to our readers?

Sure. My favorite collection of 2005 was Owen King's We're All In This Together. It's an incredible book, sharp, full of wonder and great story-telling. It comes out in paperback from Bloomsbury this month.