Okay, like many people, I presume, I have crafted tactics of procrastination
to deal with the occasional mental fog or creative palsy while sitting
at my writing appliance. One kind of diversion is to make spontaneous
visits to various book-marked web sites in an endless foraging for
I-don't-know-what. I recently stopped by Salon.com as it was top
of mind due to the beleaguered web-site's recent decision to present
its visitors with the dilemma of either subscribing or viewing a
commercial/advertisement to gain a one-day "free" pass.
For the dubious pleasure of clicking through four Mercedes Benz
pages I gained admittance. It's hard to see what Daimler gains from
this. That, of course, does make me suspicious. Nothing extraordinary
occurred (except maybe the luxury auto maker now knows something
about me, which in another time I might have worried about) and
so I leave it to others to debate the treachery of Salon's latest
grab for survival. Except to point out that to expect Salonistas
to provide free content (whatever one might think of it) without
concern about what the creators (meaning the writers) are reaping
for their efforts is to display a callousness towards the writing
craft and by extension all creative artists.

Anyway, I was on my one-day pass and I chanced upon the infamous
Tina Brown's latest offering, an article on British historian Roy
Jenkin's funeral. One cannot read this piece without noticing the
rather large and handsome full-color photographic portrait that
adorns (on the page it is a quarter of the space) her column. Though
pleasant enough to the eyes, one wonders why Ms. Brown is to be
staring at us while one peruses her 1300 words of sleek and chatty
prose about the eminent Jenkins and the people he knew and a witticism
he tossed off upon being told of another eminence's grace under
pressure when undergoing a trial by spilled gravy boat. Ms. Brown,
who swims ably and effortlessly in a large pool of exemplars of
erudition, magazine cover subjects, and extraordinary materialism,
took a while to get to the payoff. But not before exposing her rather
tame sexual fantasies (at least to this shrewd interpreter). At
the small village church in East Hendred, Roy (it's okay for Tina
to refer to the deceased in this way, we're all friends) is being
given his final send off. And Tony Blair (he's the British Prime
Minister)shows up sans security entourage. Wife Cherie [Blair] shows
up as well--"like a cute undergraduate in her scuffed boots
and curly hair." Oh yeah, the payoff. Tina drops her purse
and the prime minister "disconcertingly stoops down and picks
it up with swift courtesy. If I had been talking to the president
of the United States and dropped my bag on the floor I would have
been wrestled to the ground by a posse of 7-foot Secret Service
agents." Tina, Tina, Tina, haven't you a better fantasy life
than that?

You do have to hand it to the savvy Ms. Brown. Having exposed herself,
she is quick to recover with a salvo of ad hominem deprecation
aimed directly at our current president:

More inconceivable still is the notion that our current president
would have a strong connection -- political, personal or (needless
to say) intellectual -- with a person like Roy Jenkins to begin
with. Either way I can't imagine the handlers allowing him to
waste so much time hanging out with what Washington sometimes
refers to as "usedters" (as in used to be governor of
the Bank of England, used to be chief statistician) unless it
was election year and a campaign stop.

Now was my stroll through the nimble rhetoric and sterling silver
world view of Ms. Brown worth running the huckster's gauntlet I
opted for? Wait, there is more...

I then clicked my way over to Andrew
Sullivan's latest vivisection, this one being a rather mirthless
(come to think of it Sullivan seems to lack the wit that one associates
with Brit debating style), scolding and willfull misinterpretation
of the grand mistress of the ellipses, Joan Didion.

Call me petty but Andrew's black-and-white portrait is not quite
larger than a postage stamp. What could this mean? At any rate,
Sullivan wastes no time. Rhetorical artillery is brought out immediately:

Reading Joan Didion's recent essay-cum-speech in the New
York Review of Books is an enlightening exercise. It's
enlightening not because it persuades. There is no argument in
it. In this, Didion perfectly represents a certain type of decay
in thinking on the intellectual left. Their argument about where
we should go from here is essentially, "We shouldn't be here
in the first place."

Now Didion describes her intended tour for her book Political
Fictions and the fact that it was scheduled to begin in mid
September 2001:

But--like most of us who were in New York that week--I was in
a kind of protective coma, sleepwalking through a schedule made
when planning had still seemed possible. In fact, I was protecting
myself so successfully that I had no idea how raw we all were
until that first night, in San Francisco, when I was handed a
book onstage and asked to read a few marked lines from an essay
about New York I had written in 1967.

She described coming to a passage that left her speechless, on stage,
for a half a minute and then goes on:

All I can say about the rest of that evening, and about the two
weeks that followed, is that they turned out to be nothing I had
expected, nothing I had ever before experienced, an extraordinarily
open kind of traveling dialogue, an encounter with an America
apparently immune to conventional wisdom.

These people recognized that even then, within days after the
planes hit, there was a good deal of opportunistic ground being
seized under cover of the clearly urgent need for increased security.
These people recognized even then, with flames still visible in
lower Manhattan, that the words "bipartisanship" and
"national unity" had come to mean acquiescence to the
administration's preexisting agenda--for example the imperative
for further tax cuts, the necessity for Arctic drilling, the systematic
elimination of regulatory and union protections, even the funding
for the missile shield--as if we had somehow missed noticing the
recent demonstration of how limited, given a few box cutters and
the willingness to die, superior technology can be.

I am sparing myself a tennis-match exegesis (head moving back and
forth from the two texts) but I found Sullivan's intellectual dishonesty
almost laughable. This is his smarmy (Sorry, Joan?) conclusion:

But there you have the real agenda of the intellectual left:
the imposition of their own view, which is the only one deemed
worthy of "rationality," and a contempt for the messy
process of democracy, especially if it empowers those who disagree
with their mind-set.

Sorry, Joan. But I'll take the mess of deliberative democracy
over your rational certainties any day of the week.

Sulllivan being much celebrated as an honest commentator (Yikes!
Ron Rosenbaum made comparisons to George Orwell), this commentary
on Joan Didion reeked of the macho hubris of a young gun slinger
looking to gun down the reigning top gun. Here we have this disclaimer,
whose sincerity seems suspect:

I don't want to put words into her mouth; but since she won't
explicitly state what she thinks -- a style that seems far more
appropriate when she's observing pop culture than foreign policy
-- I don't have much of a choice.

And then the novel--though not particularly creative-- move of
casting Joan Didion as a zealous and doctrinaire old Lefty toeing
the old (and, of course, obsolete) party line. There was a time
last season when Andrew Sullivan was the poster boy for the newest
trend in punditry (web-logging), getting accolades for doggedness
and ubiquity. Assuming the generous spirit so lacking in Sullivan's
slicing and dicing of Didion, perhaps given his purported Herculean
output this piece escaped the gaze and judgment of his better angels.
In any case, it's not the kind of intellectual display that has
me wanting to read more by the much lauded Mr. Sullivan.

And as for the controversy over Salon's newest financial model,
it seems to be a directly related to the line that they have touted
over the years about being a different web site blah blah blah.
I imagine the people who wanted to believe them then, do not see
Salon that way now.

Too bad. For everyone. 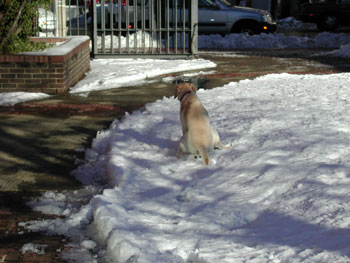