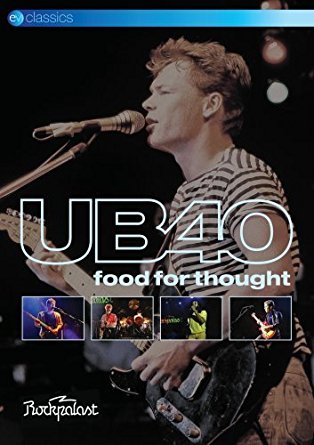 UB40 formed in Birmingham, England in 1978. Named after a document issued to people filing for unemployment benefits, they were among a number of pasty white Brit musicians getting into reggae at that point. They were drawn to the political messages, feeling a kinship to the problems of unemployment in Jamaica and, yes, they were probably also smoking some ganja.

Shot on a hot summer night in Cologne, Germany in 1981, “Food For Thought” captures the early days of the band, just after the release of their second album. Like their first record, it was a hit in their native country. They were riding high on success (and other things), spreading their appropriation of the reggae sound to guilty white folks across Europe. They weren’t exactly the Clash, but they weren’t incomparable. They wouldn’t be noticed by the Yanks for another 3 years. And sadly their original work would never chart in the U.S.

For that reason, it’s hard for a Yank like me to watch “Food For Thought” without that American stigma attached to it. The “Sliver” soundtrack doesn’t even exist yet in this snapshot of UB40’s career, but it was always in the back of my mind as I watched the Campbell brothers sweat and bop on stage among a bevy of trumpet players and a real live, bona fide Jamaican called Astro. It doesn’t help that the audience consists of mostly white, mustachioed Germans with dubious hair. These people take songs like “The Earth Dies Screaming” very seriously. They also recall the inevitable future: Republicans blasting “Red Red Wine” from their Ferraris.

But in 1981, it’s all about the politics and the sinsemilla. Back then there was nothing ironic about a ginger man in sunglasses and a tucked-in baseball jersey, playing sax under lyrics like “the poor can scream but no-one hears/the concrete jungle sings the blues.” “Don’t Let it Pass You By” is about how life is short and there’s nothing beyond so you might as well get high. In “Burden of Shame” the band apologizes to South Africa for being British.

UB40’s origins won’t be news to pre-existing longtime fans. Thus, this DVD will be a huge treat for them: An earnest and flawless performance of the band’s first two records. Bleeding hearts like me, without the aid of a certain herb, may still be bored by the droning ska rhythms, but they have to respect the band’s message. The only audiences I can imagine being truly disappointed by this performance are those cheesy dudes who only ever owned “Labour of Love”. They’ll be waiting for that one song that, thankfully, will never be played.