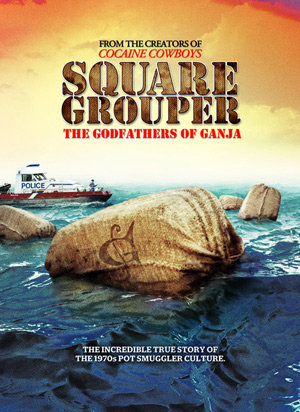 Given the recent revelations of the ways some of our organized religions have broken the law, a story of one sect smuggling weed doesn’t seem that heinous. In fact, Square Grouper is pretty even-handed in its telling of the exploits of a Florida religious group who funded their faith by moving piles and piles of its main sacrament. This documentary is filled with intrigue, swashbuckling, freedom of religion, exploitation of the poor, and all with the '70s staggering in the background.

Aside from the copious amounts of dope smoked (including by the kids) to help them worship the Lord, what is striking about the Ethiopian Zion Coptic Church is their strident conservatism. They may have looked like hippies, but they were as rabidly 1500s in their social gospel as Rick Santorum on a lenient day. The other main player in this story is Robert Platshorn, who served 29 years for smuggling marijuana, the longest such term in U.S. history. Square Grouper is based in part on his memoir of the period, Black Tuna Diaries. Like the church members interviewed for the film, Platshorn is unrepentant about those days. As he told Toke of the Town in an interview, "It took a small army of gutsy South Florida smugglers to start today's marijuana revolution…We paid the price, but our Colombian Gold started the wave for medical marijuana and now legalization."

But easing the suffering of cancer patients and dope for the common good were not priorities for anyone involved in the trade of weed and money that flowed from Columbia, through Florida, and to and from Jamaica, where Zion Coptic built a controversial compound from which to pray and smoke in peace, and maybe, maybe not exploiting the local poor in the process.

The church’s story takes up the bulk of the documentary, with the remainder being tales of derring-do about Platshorn and other smugglers – The Black Tuna Gang. Director Billy Corben offers a fast-paced, unbiased blend of interviews both recent and during the 70s, as well as great footage of news reports from the period. This ought to be more fun than it is: most of the interviews with the smugglers and congregation are fairly recent, and they are self-righteous or self-aggrandizing. There is a lot of talk about having been part of a revolution, or standing up to Babylon in the name of God, etc. There is no doubt that they are sincere, but the sentiments ring hollow. Like the period interview of one of the church elders being ushered into court in handcuffs shouting “This is what they do to a priest!” to hectoring reminders that this country was built on hemp. Self-justification and nostalgia seem more the point than freedom of religion or revolution. (Yes, George Washington did promote the growing of hemp, and it was vital to our early economy: in the context they are used here, though, they are the equivalent of putting $2000 rims on a ’78 Chevette.)

In the end, Square Grouper is a sometimes riveting, often maddening portrait of a time when there was money to be had by the shovel-full and churches to be built from dope. The shortcomings and grandiosity of those involved (including this review) in no way should suggest a position either for or against marijuana: in every endeavor, there are princes and clowns, and both strut around proudly in Square Grouper.