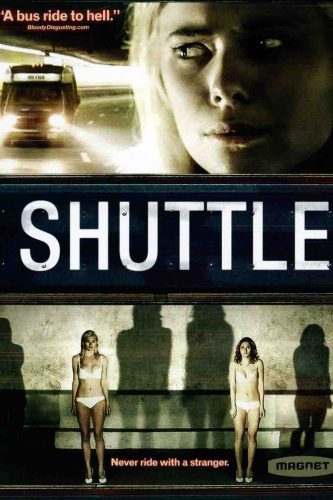 At 2:30 in the morning, it’s tempting to accept a ride from anyone who seems to be in the ride-giving business. And who knows, maybe it’s your lucky day. But maybe the guy behind the wheel actually has nefarious plans that don’t involve reuniting you with your fluffy duvet anytime soon.

“Shuttle” is one of these worst-case scenarios. Returning from a trip to Mexico in the wee hours, Mel and Jules, who have been friends for, like, 10 million years, are anxious to get home. The driver of a small shuttle service offers to undercut Big Shuttle and take the girls downtown. The pouring rain and a cash shortage encourage them to accept. Seth and Matt, just want an excuse to talk for a bit longer to the cute girls they met in Mexico, so they manage to worm their way onto the shuttle too. Also along for the ride is a squirrely family man named Andy. Perhaps the doomed passengers realize something is wrong when the driver insists on taking a traffic detour in the middle of the night, but by then it’s too late. They’re already trapped on a shuttle with a mad man. His true intentions aren’t revealed until the very end, but it quickly becomes clear that he doesn’t mean for anyone to get home.

Despite a few “twists,” Edward Anderson’s script isn’t particularly inspired. This is one of those thrillers in which the main characters have ample escape opportunities but, for whatever flimsy reasons, decide not to take them. The protagonists are pretty cookie cutter “young person” and their conflicts, designed to create character development, are pretty trite. “Shuttle” purports to be smarter than it is. Still, keeping the driver’s motive a secret makes for a riveting enough story. You also have to give credit for a reasonably original ending. It also helps that the acting is competent enough to not be distracting. You might not take much away from this film, but it’s an entertaining way to spend an afternoon. And maybe it will give you pause the next time you need a ride somewhere. Remember, ladies: Yellow Cab takes credit cards.