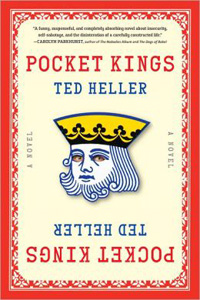 Meta: Pocket Kings, by Ted Heller, is a 355-page novel published by Algonquin Books in 2012. I bought the paperback at Downtown Books & News in Asheville, NC, while attending the Juniper Bends Reading Series curated by Identity Theory nonfiction editor Jesse Rice-Evans on August 9, 2013. The book first came to my attention via the lovely Katy Lederer's review of Pocket Kings in the N.Y. Times in April 2012.

Run-On Plot Summary: A middle-aged loser-ish writer struggling to shop his shockingly misanthropic third novel (Dead on Arrival) falls into a pit of literary despair (constantly checking the terrible Amazon rankings of his first two books--Plague Boy and Love: A Horror Story--while stalking disgusted literary agents and being humiliated by more successful writers, including the author of a vapid cooking memoir entitled Saucier: a Bitch in the Kitchen) but discovers that he has a natural talent for online poker and earns six figures playing limit hold'em in a short span of time, making "friends" while chatting on the fictional poker website PokerGalaxy and going on IRL adventures with those shady hustlers to Vegas, London and the Caribbean while his employment and marriage go to pot.

Blurb: "A funny, suspenseful, and completely absorbing novel about insecurity, self-sabotage, and the disintegration of a carefully constructed life." - Carolyn Parkhurst

What I Loved: The literary satire was entertaining, the voice was compelling, and the pace kept me engaged.

What I Didn't Love: The depiction of online poker sites as places where people chat heavily about their personal lives and hook up with each other romantically didn't ring true to me, though it was the most logical way to add human drama to an otherwise impersonal enterprise.

Author Bio (Which I Totally Just Cut & Pasted From His Goodreads Profile): "I am the author of three—no, make that FOUR—novels. They are, in order of appearance: Slab Rat, Funnymen, Pocket Kings, and West of Babylon. Slab Rat was a dark novel about office politics in the magazine business and how one man (the book's narrator) would sink to any level to succeed. The Washington Post named it one of the year's 10 best books. Funnymen was a slightly less dark, fictitious 'oral biography' about a Martin-and-Lewis-type comedy team. It followed them from cradle to grave. If there's a better novel out there about comedians, I don't know about it. Pocket Kings, which came out in 2012, was a very, very dark novel about a failed writer who achieves playing online poker the success and glory he sought in the literary world. Thought he makes hundreds of thousands of dollars playing, he still manages to lose everything else. And now comes West of Babylon. It's not really that dark at all but, compared to Pocket Kings, neither is a black room with no windows, doors, light and air..."

Other Stuff: "The Self-Publishing Travails of Ted Heller" (The Guardian)

Get Pocket Kings: You can have my copy. It's in pretty good shape aside from some numbers written on the back page which apparently served as bookmarks for the previous owner. Be the first to email me at editor@identitytheory.com. Otherwise, buy your own damn copy on Amazon.