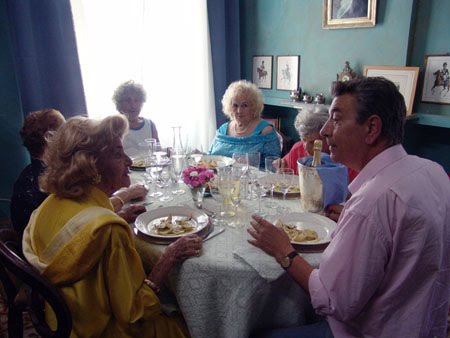 Gianni Di Gregorio directs and stars in this mild light comedy about a middle-aged unemployed Roman named Gianni who is living with his 93-year-old mother in a condominium apartment. Amidst mounting debts – including an electric bill that has not been paid in three years – Gianni agrees to look after the building manager’s elderly mother during the Pranzo di Ferragosto, the Italian summer holiday. However, the manager sticks Gianni with both his mother and an elderly aunt. Complicating matters, Gianni’s physician deposits his elderly mother in exchange for excusing Gianni’s unpaid medical bills.

“Mid-August Lunch” has an interesting set up – four elderly women and a beleaguered comically-oriented man getting along in an increasingly cramped setting. Unfortunately, the film never really clicks. Di Gregorio’s screen presence is too benign to make any impact; his character is so thoroughly lacking in personality that it is difficult to imagine why he would anchor the film around such a dull man.

Even worse, the quartet of elderly ladies lack any significant depth or scope to be taken seriously as individuals. Each elderly woman seems like a caricature rather than a character, and it is difficult to connect with these non-dimensional interpretations of the elderly. The one scene that could have had impact – where the building manager’s mother escapes from the apartment to enjoy drinking and smoking at an outdoor café – is executed in such a flat and stolid manner that any possible fun leaks out before the scene runs its course.

At 75 minutes, “Mid-August Lunch” is also surprisingly short as a feature film. A longer running time may have provided it with more plot possibilities or more texture for the characters. As it stands, this “Lunch” feels more like an unsatisfactory appetizer than a satisfying main course.