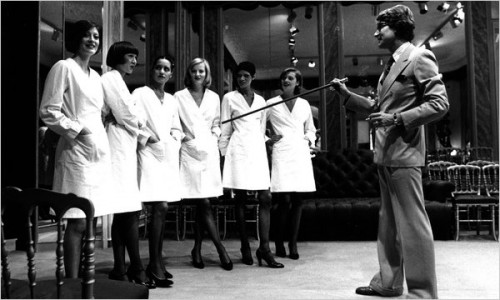 Those who love hearing fashion discussed as serious art will love this documentary, a portrait of the late iconic French designer, Yves Saint Laurent. The film enters the story of Laurent by learning that his sizable art collection will be auctioned by his long-time business and romantic partner, Pierre Berge. Laurent's legacy, as told by Berge, is aligned to the masters whose works the two owned. Berge's choice to sell the art (eventually sold for over $480 million, according to sources outside the film) allows him a final word, though he's mostly celebratory.

Laurent came to prominence as the assistant to Christian Dior. The meeting of Laurent and Berge, which happened at Dior's funeral, seemed like fate. Politics briefly enters the frame when we learn why Laurent was canned from the company. House of Dior owner Marcel Boussac allegedly helped Laurent dodge the draft for the French-Algerian war, before Boussac changed his drift to get Laurent replaced at Dior. (The documentary avoids some unsavory facts, that Laurent did serve 20 days in the military before stress from getting hazed led him to a military hospital, where he learned of his firing from Dior.) But the moment's a launching point for Laurent and Berge to start their own fashion house, which seated the former as the iconic creator of a variety of women's wear and the popular beatnik look.

The documentary uses a rise-and-fall form by eventually moving to Laurent's addiction, infidelity to Berge, and long-time struggle with depression. Director Pierre Thoretton relies only on Berge's account, which both limits the scope and overuses Berge's monotone talking-head interviews. Excitement ran throughout Laurent's tenure, evident in some footage of events and his designs, which makes this low-key aura odd. Since this profiles one of their gods, fans of fashion will delight over the subject, especially those who love the gay-outsider-who-makes-it theme. In The Devil Wears Prada, it took Stanley Tucci one scene to nail it, while this film's still searching at 103 minutes.

L'Amour Fou is unrated; in limited release and available On Demand through IFC Films.