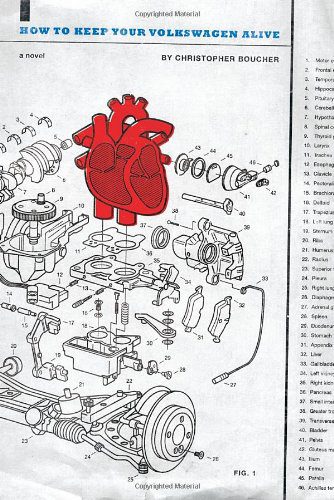 Of all the preposterous faux vehicle manuals out there, Christopher Boucher’s How to Keep Your Volkswagen Alive has to be the most ridiculous. And that’s a compliment. The story of an unnamed human narrator (hyphenation goes to great lengths to preserve his anonymity) and his son, a 1971 VW Beetle, HTKYVA is a meditation on the meanings of expression, life, death and survival in the constantly revising geography of western Massachusetts. If Donald Barthelme had been a febrile mechanic, he still wouldn’t have written HTKYVA, but I’m sure he would have praised Boucher’s inceptive novel.

Boucher-land is a place inhabited almost exclusively by nonhuman characters, where automobiles have existential crises, buildings run away, the night can carry on a conversation, and moods are as commodified as anything else. HTKYVA begins with the VW Beetle’s second birthday and only gets weirder, blending the agonies of adulthood with a Looney Tunes aesthetic. Every other chapter or so is a “How To” section (on reading a VW manual), which usually means “How To Read this Book”:

“Begin reading the first page, and you’ll see, first and foremost, a story. There are no hidden implications here-- it’s not that this book is made only of stories, nor are stories necessarily the most important components, but you can’t completely understand your Volkswagen without them.”

It’s all very tongue-in-cheek (although rarely laugh-out-loud funny) and hectically engaging, as the VW starts growing into adolescence like any other child, and the narrator reminisces about his former lover, The Lady Made Entirely of Stained Glass. Boucher lets his imagination rampage in this epic, 239-page metaphor, offering the silhouette of an autobiography, and an insensibly sensible deconstruction of storytelling.

Then, sliding into tragic mode, HTKYVA becomes a journey of finding the Heart Attack Tree that felled the narrator’s father, relegating the narrator to co-exist with the Memory of My Father and the Two Sides of My Mother, and the maddening stasis of trying to write away all the pain and anxiety. The narrator gets a job as a reporter (his first assignment is to investigate why a certain street in town has turned into a canal overnight) while trying to care for an increasingly ill and disruptive VW son. But throughout, interactions between the narrator and a fish, a fight with a fallen leaf, a hitchhiking bull, and a professor called Chest of Drawers keep HTKYVA whimsical and deranged in the midst of the book's melancholic undertones.

HTKYVA is a keenly human handbook on loss and the frustrations of trying to write it all away and a self-help guide on son- and fatherhood. At the center of the book is the search for an ulterior universe where routine mundanities are transcribed into a vividly silly symbolism. It's an allegorical sandstorm, populated with superb subjects who are often nonhuman and occasionally inanimate. Boucher’s first novel is a maddening survey of post-collegiate suffering and a self-referential explanation of how to make art. Acid cartoonism would be one phrase to describe Boucher’s kinetic world, but even it does not convey the weirdness of his work.

For anyone who’s ever wished for a novel-length rendition of Tom Waits’s “The Piano has been Drinking,” HTKYVA is the triumphant answer. Equally infuriating and enlightening, it's an utterly absurdist chart of implausible literature and the cathartic experience of maintaining a VW Beetle. This is a head-tilting exercise in literary shape-shifting--or, to use a better word, coined by the author, "shiftshaping"--of people, objects, and emotions.

“Some tunes were productive,” Boucher writes, “but others were wild storychases down strange antiroads, which led us, when we reached the supposed destination, to the Memory or Promise of a story but no actual story.”

Michael Peck is currently a sometime reviewer for the Missoula Independent, and his essays, reviews and fiction have appeared in The Believer, Eclectica, Juked and elsewhere.