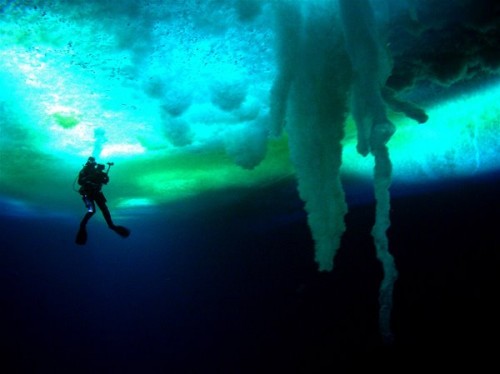 One image in this film is purely apocalyptic: a computer reproduction shows specs swirling away from a mass of white, which director Herzog tells us in voiceover is a polar cap losing iceberg-sized pieces into a warming sea. The creeping destruction is subtle, even if our species grants it a fast approach. It is one key discovery made at the tip of the world, which Herzog investigates in full in this new, extravagant documentary.

This filmmaker can't resist extremes, both geological and psychological. His trademark fictional films look to obsessives who want to conquer the unknown, which often results in suffering and madness. Herzog's documentaries seek out real-life examples of the same, some who survive, while others, like Timothy Treadwell in Grizzly Man, are consumed by their obsession.

Encounters doesn't zero in on one obsessive, but portrays the colorful eccentrics drawn to live and work in Antarctica. Much of the film feels like an essay, as it investigates local wildlife -- one lone penguin is programmed to journey to his peril -- and the natural wonders under the tundra waters, filmed after strings of dynamite crack a hole through deep ice. Yet this purported nature documentary muses on everything it encounters, and hints toward all the other wonders of the world beyond our sights.