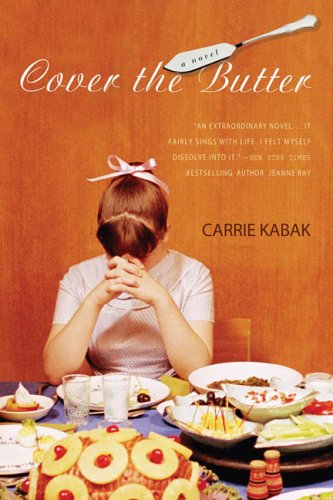 Carrie Kabak’s debut novel Cover the Butter (Dutton/Penguin USA, 2005) is a heart-warming and, at times heart-breaking, coming-of-age tale of a forty-something British housewife who realizes that it is never too late to cut the apron strings. The protagonist and narrator, Katie Cadogan, returns from holiday to find that her son all but destroyed the house she spent months restoring for him. Stupefied by the wreckage, Katie takes a wine induced journey back to the day she was given her first bra. Beginning in the mid-sixties and ending in the mid-nineties, Katie recounts her oft times hilarious adventures growing up in a small English village with a controlling mother, a spineless father, two devoted best friends, and a few bad men. The primary question on Katie’s mind is, how did she lose control of her life?

However, in following Katie from adolescence to adulthood, the reader will wonder if she ever had control of her life. She allows nearly everyone in her life to define who she is and what she will become. As is true for most people, Katie’s instability and lack of personal strength is a reflection of the emotional abuse sustained in her wonder years. Her mother, Biddy Cadogan, is the primary barrier between Katie and self-determination. Biddy is the quintessential Irish Catholic mother devoted to improving what she believes is Katie’s wayward behavior. She scrutinizes and commands every aspect of Katie’s life, including her friends, her clothes, her hair, and her weight. Although this may seem typical of an overly protective mother, Biddy’s comportment is that of a woman bitter and angry about her past. She was raised by a woman equally as stouthearted and then married a man, Tom Cadogan, on whose seeming lack of ambition she blames her less than luxurious life. Biddy’s self-consciousness about her socioeconomic status is cleverly conveyed through her obsession with appearances. She shops for new clothes virtually everyday, she exaggerates her own family’s status while criticizing her husband’s modest background, and is fixated on Katie studying the right course at the right university and marrying the right man. Biddy is clearly trying to relive her life vicariously through Katie.

Convinced that her mother’s megalomania is merely motherly love at its extreme, Katie concedes to Biddy’s will. Aside from casting her dreams of becoming a caterer aside to become the teacher Biddy never could, she also finds herself in the arms of men who offer the type of financial security and social status her mother craves but little else. Her first of two significant relationships ends in betrayal while her second dissolves into a twenty-year loveless marriage. Both are eerily reminiscent of the relationship Katie has with her father who dotes on her with candy but yet abandons Katie when Biddy is on a rampage. As Katie reminds the reader, Tom is not in charge and is as susceptible to his wife’s frequent demands, seething attacks and tantrums. Needless to say, neither of Katie’s parents gave her the love she needed to love herself.

All this makes for a highly sympathetic character who the reader wants to route for until the bitter end. Unfortunately, the author does not balance Katie’s weaknesses with her strengths, of which there are few. There are several scenes in which her stoical responses to Biddy’s cruelty and her husband’s negligence are both angering and annoying. But what the novel lacks in character development, it compensates for in laugh-out-loud humor. The absurdity of Katie’s challenges makes her altruism bearable enough to forgive her doormat complex, especially since her inability to successfully challenge her mother until she’s forty-four is something to which all readers can relate.

In addition to formerly being an assistant editor for identity theory, Crystal AM Nelson is a freelance writer and photographer. She currently lives in New York City.