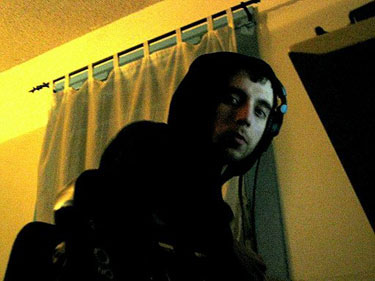 1. What's the first piece of music you listened to today?
Mozart's Piano Concerto No. 23 in A Major.

2. What are your vices?
I speak my mind.

3. What is one of your prejudices?
The clumsy media and their intrusive and often inaccurate portrayal of the public figure.

4. In what way do you think music has the ability to change
the way people live their lives?
It's the purest form of human expression. It can influence and inspire us in immeasurable ways. I find the most visceral and stimulating form of music to be classical. It comes to you from a different angle.

5. At what age did you first feel distrust?
When I was a child, I would draw pictures excessively. By the time I was 7 or so I had moved on to drawing picture books (like comics, I suppose). I had an abundance of work that I was very proud of. One morning I awoke to it all missing (except for a small handful). I was saddened and confused by this. I later found out that my mother had thrown it all away to conserve space. It did my head in for years.

6. Do you think that your name is appropriate for you?
(If not, what name would be more appropriate?)
I do, although it's rarely pronounced properly.

7. What is the best piece of music you've ever created,
in your opinion?
Most of the stuff I'm into I haven't yet published. I have loads of material; it all affects me in different ways.

8. Right now, how are you trying to change yourself?
I'm always working to better myself. It requires discipline, lots of it.

9. If you had the time, what else would you do?
Make records.

10. What social cause do you feel the most strongly about
(negative or positive)?
U.S. health care, but I find bickering about it to be a waste of energy. These decisions are ultimately made from the top.

11. What are your fears?
Earth's inevitable demise, along with all of man's greatest creations and achievements. Humans being reduced to mythology.

12. What is your favorite joke (tasteful or tasteless)?
I suppose I don't really have a favorite joke. I don't find many people to be genuinely funny. My favorite comedians tend to be my friends.

13. Who is your favorite author?
William Shakespeare. Shakespeare's work encompasses just about everything and in the most compelling fashion.

14. What is your favorite movie?
Currently, Barry Lyndon. Although it usually changes from one Kubrick film to another.

15. Favorite album(s) from the last few years?
In Rainbows

was good. I'm big into Tom Jenkinson, Hello Everything was brilliant. That's about it, really. I find the majority of music today to be rather boring and monotonous. Most of what I listen to is classical music. I have a fairly modest-sized classical collection, which I've come to develop over the years. It's become my mini shrine of sorts.

16. What would you like to know more about?
The galaxy, extraterrestrials.

17. What is one thing you would like to do/see/accomplish
before you die?
The Higgs Boson, and perhaps a human mission to Mars would be interesting.