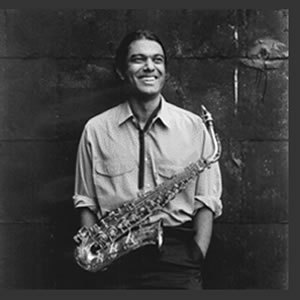 I watch way too much TV. Is TV getting better or am I getting dumber?

3. What is one of your prejudices?

I hate ignorance. Is that a prejudice? My tolerance diminishes everyday. I'm a teacher and (I think) a very good one. Lately, I'm having hard time extending that patience and understanding to others outside of an educational setting.

4. In what way do you think music has the ability to change the way people live their lives?

Music can heal emotionally and physically. Music (vocal or instrumental) can tell the stories of the triumphant and the fallen, the joyous and the sorrowful, and every experience one could imagine that occurs in between.

5. At what age did you first feel distrust?

6. Do you think that your name is appropriate for you? (If not, what name would be more appropriate?)

Yes, my name is appropriate (so others say) though it's a tall order. Rudresh was the incarnation of Shiva who saved humanity. Mahanthappa comes from the same Sanskrit root as Mahatma. Enough said.

7. What is the best piece of music you've ever created, in your opinion?

8. Right now, how are you trying to change yourself?

I'm trying to get back to a carefree creative mindset. It's hard when the realities of adulthood rear their ugly heads.

9. If you had the time, what else would you do?

My wife just asked me the same question. I would learn how to sculpt. The most moving art to me has always been sculpture be it the Burghers of Calais by Rodin, Monument à la Bête Debout by Jean Dubuffet, or Noguchi's [Red] Cube to name only a few.

10. What social cause do you feel the most strongly about (negative or positive)?

Child hunger. What could be more heartbreaking? Politically, I'm a proponent of immigration reform. My parents were immigrants...

Phobias or fears? Phobias: I hate small spaces. Fears: I fear the consequences of what we as humans are doing to this planet.

12. What is your favorite joke (tasteful or tasteless)?

So an accordion player is coming back from a gig. He's hungry and pulls over at a diner for a late dinner. He's afraid of leaving his accordion in the backseat, but he's too tired to take it in. He eats a hearty meal, pays up, and goes back out to his car. Much to his disappointment, one of the rear passenger windows in broken. He looks in the backseat, and what does he see?

Another accordion next to his!

Related to that, my favorite bumper sticker: Accordions don't play "Lady of Spain," people do.

13. Who is your favorite author?

14. What is your favorite movie?

Off the top of my head, it's a tie between Close Encounters of the Third Kind and Pi. In recent years, Primer

is also a good one.

Last few years? How many years is that? I can't nail that down. A student turned me on to the hip-hop label Def Jux and I've been digging those artists a lot. Most of what I go to for inspiration is older, be it jazz from the 50's-70's or rock from the 70's-90's.

Economics. I'm not talking about listening to Bloomberg Radio. I already do that. I'd like to learn more about hardcore economic theory, like the stuff people win Nobel Prizes for.

17. What is one thing you would like to do/see/accomplish before you die?

I'd like to have a big, prosperous family with my wife. I'd like to enable that by being world renowned and historically significant for what I do.