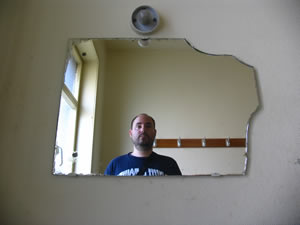 1. What's the first piece of music you listened to today?
Yoshi Wada "Lament for the Rise and Fall of the Elephantine Crocodile" (1982) - Side Two

2. What are your vices?
I don't know if it's a vice, but Espresso. Also, I'm starting to feel that the Internet is becoming a vice.

3. What is one of your prejudices?
Active indifference, at the moment... that proud exclamation: "I don't care"...

4. In what way do you think music has the ability to change the way people live their lives?
I think that some of my music can make people feel a wide range of human emotions in a short period of time. Other pieces can make them feel the same for longer periods of time.

6. Do you think that your name is appropriate for you? (If not, what name would be more appropriate?)
My own, Christian-given name? Yes.

7. What is the best piece of music you've ever created, in your opinion?
I don't think of music in absolutes in that way! I also don't have a "top ten of all time" anything - these change from day to day. Right now I'm quite happy with the version of Dick Raaijmakers' "Vier Fanfares" I realized for the tribute-concert in Eindhoven.

8. Right now, how are you trying to change yourself?
I need to get in better shape; my health has been a real albatross around my neck, so to speak. Too much sedentary time spent in front of a computer!

9. If you had the time, what else would you do?
Travel without having to be at club A at B o'clock. Also, volunteer...

10. What social cause do you feel the most strongly about (negative or positive)?
PETA

11. What are your fears?
I have a re-occurring nightmare that I have to go back to high school, despite the fact that I am a college graduate. This somehow references a fear of incompletion...

12. What is your favorite joke (tasteful or tasteless)?
"Why did the monkey fall out of the tree"?

(long pause - and this is essential)

13. Who is your favorite author?
Donald Barthelme

14. What is your favorite movie?
Putney Swope for "narrative" film, but also any number of experimental shorts by Peter Kubelka, Jud Yalkut, Bruce Conner, etc.

15. Favorite album(s) from the last few years?
Again, no specific "bests" per se - although right now I am listening to the Jason Lescalleet / Nmperign 2cd on Intransitive often. 9 times out of 10 when I reach for a record from the shelves it's from at least 15 years ago... oh, I like that first Clientele record, I listen to that all the time.

16. What would you like to know more about?
Electrical engineering. I just don't have the patience for it right now...

17. What is one thing you would like to do/see/accomplish before you die?
I'd like to be at peace. I've got a long way to go...