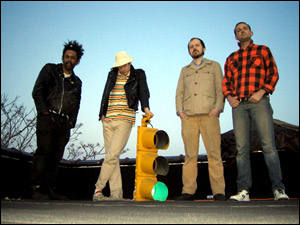 1. What's the first piece of music you listened to today?
Led Zeppelin "Nobody's Fault But Mine" I'd like to think the band was taking ownership of their effects on the world in this track.

2. What are your vices?
I'm not catholic.

3. What is one of your prejudices?
I don't like judgemental-types.

4. In what way do you think music has the ability to change the way people live their lives?
The existence of music suggests an understanding that the forces you may call nature or spirit are more powerful than human law.

5. At what age did you first feel distrust?
At age three I was beaten unconscious by friends with shovels. It's all been south from there.

7. What is the best piece of music you've ever created, in your opinion?
I don't go around ranking everything like the British internet people, but I'll admit to creating a few of what I would consider classics.

8. Right now, how are you trying to change yourself?
I drank a cup of green tea and anticipate its natural effects.

9. If you had the time, what else would you do?
We all have the time. Money's the issue, isn't it? I'd probably get that taken from me too. I'd like to learn Chinese so I could better appreciate poetry.

10. What social cause do you feel the most strongly about (negative or positive)?
I believe that accurate weather forecasting information is being deliberately witheld from the public. The technology exists, but contradicts the inner government charade of applying moral superiority to the wealthy.

11. What are your fears?
That I'll die before erasing all my hard drives.

12. What is your favorite joke (tasteful or tasteless)?
"Rated ARRR."

13. Who is your favorite author?
I'll admit I don't read much fiction anymore. I think of authors whose books I've enjoyed like Melville or Miller and realize I've hardly read anything by them. I spend most of my time researching.

14. What is your favorite movie?
The Bride of Frankenstein

15. Favorite album(s) from the last few years?
Albums are a quaint idea in this day and age, but I enjoy them, especially those by Ghostface, the White Stripes and Kraftwerk.

16. What would you like to know more about?
The hazing rituals of secret sororities.

17. What is one thing you would like to do/see/accomplish before you die?
Don't get me wrong, I want to play a hit song.